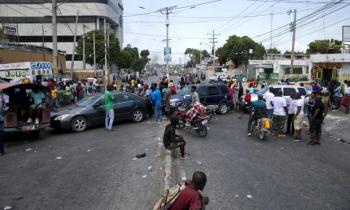 Residents block a street with their cars in a protest at fuel shortages in Port-au-Prince. Photograph: Dieu Nalio Chery/AP

Last Sunday, Rony Marceline was riding his motorbike out of Ouanaminthe, a muggy, colourful town on Haiti’s border with the Dominican Republic, on a mission that within a few days has become commonplace: transporting yellow plastic containers of petrol. He hit a lorry and the canister split, enveloping him and his passenger, an as yet unnamed woman, in flames.

Until that moment, the newly necessary practice of carrying cans of fuel had been the subject of meme humour in this country where the petrol is running out and the usually intense traffic is stuttering to a halt. In one, an elegant woman carries a can under the caption: “the new accessory”. But now there is no joking: now the whole country is ready to explode.

Haiti, on the western end of Hispaniola, has fallen to depths its people cannot fathom. Protests, continuing into this weekend, have seen roads across the country blocked with rocks, trees and burning tyres, while in the capital, Port-au-Prince, senators engaged in fist-fights on the floor of the senate. The president, Jovenel Moïse, was due to fly to the UN on Sunday, his authority draining away.

“It feels like something is going to break, and it needs to,” says Marie Pascal, an economist.

“I can’t remember a situation this bad,” says Leslie Voltaire, an architect and former presidential candidate.

This view – that it has never been so bad – is repeated again and again across a country that has suffered, in living memory, the Papa and Baby Doc Duvalier dictatorships, a US invasion, and the 2010 earthquake that claimed up to 300,000 lives.

And the anger is worsened by wounded pride. This is the nation born in 1804 from a successful slave revolt. The walls of its cities show murals of the heroes Toussaint and Dessalines in Napoleonic bicorn hats. It’s a history Haitians believe the world ignores due to racism, preferring instead Donald Trump’s claim that Haiti is a “shithole”.

With postcard-pretty houses, glistening beaches and fortress-topped mountains, Haiti makes a mockery of that insult, but it’s true its governance is a shambles. President Moïse has been attempting to install an inexperienced prime minister, Fritz-William Michel, but Michel is beset by allegations of corruption, including the claim that he used government funds to buy thousands of overpriced goats from one of his own companies. He has denied the allegations.

Meanwhile unemployment stands at over 70%, per capita annual income at $350 and inflation at 19%, while the economy is propped up by $2.7bn of remittances sent in by Haitians abroad, representing a third of GDP. Trade is controlled in a large part by Dominicans, and what assets the country has are in the hands of a few super-rich families, fuelling poisonous resentment.

The ongoing protests have been caused by the fuel running out. Successive governments have kept the price low by first getting supplies from socialist Venezuela, then through subsidies. But the state can no longer pay – and with outstanding bills of $63m, the fuel companies are no longer supplying. Prices have to rise, and with them the cost of food.

Sitting in the shadow of a mango tree, in the Yanvalou restaurant on the side of the mountain above Port-au-Prince, is Didier Dominique. He runs Lakou Bovwa, a religious site that preserves the legacy of Max Beauvoir, a famed supreme servitur of the voodoo priesthood. Dominique knows his country. In the 1970s, he helped restore the extraordinary post-independence fortress of Citadelle Laferrière, and in the 1980s and 1990s he travelled the nation to identify historically important sites.

He is certain that something is going to break, but not the direction it will take. He talks of the danger of Nicolas Duvalier – Grandbaby Doc if you like – who has been canvassing for support among expats in Miami. Is there a constituency for a member of the tyrannical family who ruled Haiti through fear from 1957 to 1986?

“Oh yes,” says Dominique. “Among small business people. I met one. He wants to make nails, but the Bigio family, who has the monopoly on steel here, pushed him out. That is the type of person who would support Nicolas, and there are many more like him.”

On the other side of the border there’s another belch from the past. Haitians have long crossed into the Dominican Republic to find work. Back in 1937, the Dominican dictator Rafael Trujillo ordered an ethnic cleansing that saw an estimated 20,000 Haitians killed. That might seem long ago, but Trujillo’s grandson Ramfis is running for president in next year’s Dominican elections, and on a hardline anti-Haitian platform.

“Trump is the one following me because I started talking about the wall before he did,” Ramfis told a fundraising event in the US late last year. “We will have to build a wall from north to south.” This despite, as Dominique says, “all those gleaming towers in Santo Domingo being built by Haitians”.

Last week, a video circulated among Dominicans claiming that Haitians were storming the border, and showing people running past burning cars. At that moment, I was walking towards the border where it runs along the morbidly named Rio Massacre in the north. My guide, Bulos Riche, pointed to two streets that led to the river, and asked if I wanted the “legal or illegal crossing”. Then he paused and said his grandfather only survived 1937 by swimming.

At the legal crossing, Haitians were crossing the border, but towards home. Many were on motorbikes with contraband tanks of petrol, and I watched as they politely bribed the Dominicans guarding the gates.

There is a saying in Haiti: “As heavy as a 50lb weight.” You can see one in Port-au-Prince’s Pantheon, where the heroes of independence are celebrated; it’s what plantation owners would place on the heads of slave girls who had aborted their babies. Pride in the achievement of freedom is the most striking thing about the country. Yet, in the words of Dominique, “most Haitians would now be willing to work in conditions just short of slavery, and many already are in the textile factories”.

The tension can be heard on the streets. Several times, people tell me that the super-rich are “foreigners”, despite having been Haitian for generations. Beautifully stencilled graffiti – Haiti is a very artistic country – have appeared on walls showing a noose and the words, in Creole, “the money or the rope”. Dominique hands over a copy of “sitiyasyon – aksyon”, a Creole pamphlet being circulated by Batay Ouvriye (working-class struggle). For the most part a Marxist analysis of the situation, it ends with a call for the creation of an armed wing, for “self protection”. Opposition parties are calling for further national strikes. Trouillot is certain an uprising is coming: “Maybe not in the next two weeks,” he says. “But within the next four months.”

On the other side of the bridge over the Rio Massacre lies Ouanaminthe and the bustling corner where Rony Marceline began his final journey last Sunday. Barbers offer their services under signs in Creole saying “God is my boss”. Money changers work in the shade. I watch a funeral procession pass, a band at its head, mourners as elegant and proud as any to be seen in New Orleans.

I am standing with Joseph Theonone, who knew Marceline well. I ask what sort of man he was, and he tells me he had two children who live with their grandmother because he was no longer with his wife. But what was he like, I persist, now watching people load up yellow containers of petrol and carry them away on motorbikes. Theonone looks at me and says: “He was a poor man.”