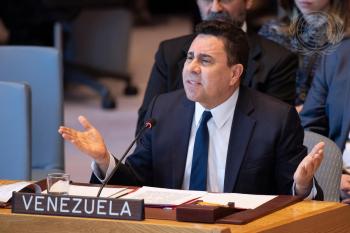 The United Nations General Assembly (UNGA) voted Monday to recognize the credentials of the government of President Nicolás Maduro as the legitimate representative of Venezuela.

In a speech before the General Assembly, Venezuelan United Nations (UN) Ambassador Samuel Moncada stressed the need for the organization to defend the principle of sovereignty in the face of US imperialism that he said constituted a “violation” of the UN Charter.

“We thank the member states in this assembly for recognizing our credentials and rejecting the colonial aggressions against our country and recognizing the will of our people,” said Moncada.

For his part, Venezuelan Foreign Minister Felix Plasencia called the vote a “resounding victory for International Law and a slap against imperialist interference and aggression.”

Referring to the hardline opposition, Plasencia said that the UNGA vote was a “dose of reality for those who persist in giving oxygen to a dying political fantasy” and suggested that those who insisted on backing the Juan Guaidó-led “interim government” were driven by an interest in “continuing to profit from the assets stolen from the country.”

The recognition of the Maduro government at the UN marks yet another setback for Venezuela's self-proclaimed “Interim President” days after former ally Julio Borges resigned his post as “foreign minister” in his administration and called for it to “disappear completely”.

Borges—who hails from the opposition Justice First party and has grown increasingly critical of Guaidó— said in an online interview the US-backed administration had become a bloated bureaucracy and should only serve to manage foreign-based state assets.

“It’s a shame that Guaidó’s party has no desire to do things properly,” said the anti-government leader, who went on to call for a rebuilding of opposition efforts to regain “strength and credibility.”

The management of Venezuelan assets seized by other states such as Colombia and the US has been a point of contention inside of Guaidó’s coalition, with various parties trading blame for the mismanagement of assets such as Colombia-based agrochemical producer Monómeros. The former lawmaker has likewise been under fire for his actions in international litigation cases which have left US-based oil subsidiary CITGO close to being seized by creditors. For his part, Borges called the alleged corruption in the handling of foreign assets “disgusting and sickening.”

The “interim” administration led by Guaidó only managed to get 16 countries at the General Assembly to vote against the recognition of the Maduro government as the legitimate representative of Venezuela. The figure represents a far cry from the approximately 60 countries that opted to follow Washington’s dictates and recognize the then National Assembly president in January 2019.

With the return of hardline opposition parties to the democratic process in the recent regional elections, the sector headed by Guaidó appears now to be largely maintained by the US Department of State, leaving both the hardline leader and the US increasingly isolated in their stances.

US Assistant Secretary for Western Hemisphere Affairs Brian A. Nichols recently tweeted his support for Guaidó and invited him to participate in the State Department’s “Summit for Democracy” that has even been criticized by outlets such as The Economist for being driven by political interests.

The opposition frontman also counts on the support of Boston Celtics player Enes Kanter, who recently published a video about Venezuela on his social media. Kanter, who has grown increasingly critical of regimes that do not favor Washington since becoming a US citizen, was heavily criticized on social media. He had likewise drawn controversy for a racist tirade against Asian-American basketball player Jeremy Lin.

Edited by Ricardo Vaz in Caracas.