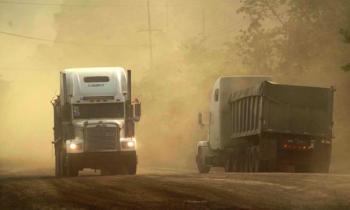 Lorries exiting the Fenix mine in El Estor. At the time of the killing, the Fenix mining project was owned by Toronto-based Hudbay Minerals. Photograph: Guardian

A judge in Guatemala has accepted a guilty plea by the former head of security at Central America’s largest nickel mine who was on trial for killing an Indigenous leader, in a rare conviction over human rights violations allegedly linked to Canadian-owned mining companies in the region.

Mynor Padilla was found guilty on Wednesday of homicide for the 2009 fatal shooting of Adolfo Ich, a Maya Q’eqchi’ teacher and community leader who opposed the Fenix mine outside the town of El Estor.

“We have spent a long time seeking justice,” Angélica Choc, Ich’s widow, told the Guardian outside the courthouse, in Puerto Barrios, a port city 185 miles east of Guatemala City, following the ruling.

“It is not going to bring my husband back, but I feel satisfied.”

Transnational mining corporations, most of them Canadian, their personnel, and state security forces have been accused by human rights groups of a litany of abuses in Central America, including the killings of mine opponents.

Prosecutions are rare, and criminal convictions of mining company personnel are almost unheard of in the region. Patricia Quinto, who represented Choc, a joint plaintiff in the trial, said that the verdict set an important precedent in the country.

At the time of the killing, the Fenix mining project was owned by Toronto-based Hudbay Minerals, which faced opposition from local Indigenous communities to plans to reopen the mine. The company faces ongoing civil lawsuits in Canada related to violence against Indigenous residents, including Ich’s killing.

“We will review the court’s written decision once it is released. Any agreements made in the Guatemalan court do not affect our view of the facts or Hudbay’s liability in relation to civil matters currently before the Ontario court,” a Hudbay Minerals spokesperson told the Guardian in a statement.

The nickel mine had previously operated under other Canadian ownership during the country’s 1960–96 civil war between the military and leftist guerrillas. An estimated 200,000 people were killed during the war, most of them Indigenous Maya civilians killed by the military.

Corporate land and mining rights acquired under military rule sparked decades of conflict and opposition from local Indigenous communities. The Fenix mine is located on the country’s largest lake, in a predominantly Maya Q’eqchi’ region in eastern Guatemala.

The mine has been linked to violence for decades, including extrajudicial killings and enforced disappearances during the civil war, according to a United Nations back truth commission.

The mine reopened amid violent clashes with local protestors in 2014, and it is now owned by the Solway Group, a Russian conglomerate. In 2019, Guatemala’s constitutional court upheld a petition to suspend operations at the mine pending consultation with affected Indigenous communities.

“There are many brothers and sisters in this struggle,” said German Chub, who was shot and paralysed by mine security personnel on September 27, 2009, the same day Ich was killed.

A former army lieutenant colonel, Padilla was also found guilty on three counts of culpable injury for his role in Chub’s shooting and assaults on two other Indigenous men from a nearby village.

Padilla spent four and a half years in prison prior to an initial 2017 acquittal, overturned in appeals. He pleaded guilty in December 2020 following a sentencing and reparations agreement between the prosecution and defense. He will not face further jail time.

Padilla and his defense lawyers declined comment following the ruling Wednesday. The full sentence will be formally issued on 13 January.

“For me it is a relief and at the same time it brings sadness,” Chub told the Guardian.