Guess how much $$ the US allocated to Haiti in the past 9 Years? 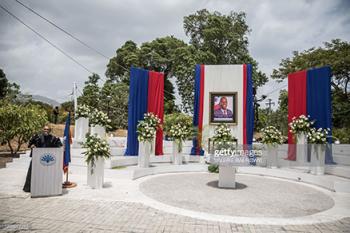 Erol Josué, Director of the National Bureau of Ethnology, speaks during a ceremony in honor of late Haitian President Jovenel Moise at the National Pantheon Museum in Port-au-Prince, Haiti, on July 20, 2021. Moise's funeral is set for today, July 23, 20201 in CAp Haiten. He was murdered in his home on July 7, 2021. (Photo by VALERIE BAERISWYL/AFP via Getty Images)

Of all the talk of supporting Haiti and the Haitian people, U.S. assistance to Haiti in dollars over the past 9 years actually tell a completely different story, News Americas has found.

According to data released by the Congressional Research Service last year, between Fiscal Year 2012 and 2019, the US allocated just shy of US$2 million to Haiti or $1,981,572 to be exact.

The number decreased from 2012 annually, to the lowest request this Fiscal Year.

However, both are at an all-time low and the lowest under the Donald Trump administration, when Haiti was allegedly referred to as a “S-Hole” nation.

The majority of the funding is allocated to health programs and little to economic support and development, the data shows. This even though according to the State Department, U.S. policy toward Haiti is “designed to foster the institutions and infrastructure necessary to achieve strong democratic foundations and meaningful poverty reduction through sustainable development.”

The Obama administration instead put the emphasis in his second term on development assistance in the final three years of his term, with nothing before, the data shows. Nothing was allocated for the Economic Support and Development Fund throughout the Obama tenure, the CSR number revealed.

This again even though the US said its “policy priorities include support for economic growth and poverty reduction, including through bilateral trade and investment to promote job creation.”

However, according to the State Department, Haiti has made long-term development progress over the past 10 years.

They pointed to for example, the fact that “basic health indicators improved significantly, most notably achieving zero laboratory-confirmed cases of cholera for the last nine months of 2019.”

The State Department also reported that with U.S. and other international support, Haiti had created 27,000 jobs through programs to improve private sector competitiveness and another 14,000 jobs at the Caracol Industrial Park in northern Haiti.

This despite the US saying its focus is on “strengthening the HNP (Haiti National Police) so that the country can provide its own security and work more effectively with U.S. agencies to combat international crime.”

On Thursday, U.S. Secretary of State Antony Blinken called on new Haitian Prime Minister Ariel Henry to seek broad political consensus as he establishes the government’s priorities and to work quickly to establish conditions for free and fair elections.