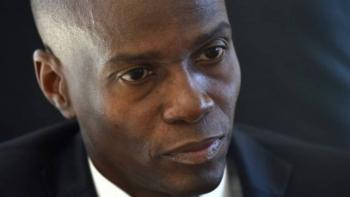 But with five months left before the terms of one-third of the Senate, the entire lower chamber of Deputies and all locally elected posts expire, there are questions about whether Moïse — whose allies claim would be allowed to rule by decree in the absence of a Parliament — really wants to form a government. In the meantime, the ratification of Fritz William Michel, Moïse’s nominated prime minister, by Parliament doesn’t appear to be certain.

“The president really doesn’t want to have a government,” said Abel Descolines, an opposition lawmaker in the Lower Chamber of Deputies, where Moïse supporters over the weekend decided to boycott a commission tasked with investigating Michel’s paperwork after they lost a vote to preside over the process.

Five months after Haiti’s Lower Chamber of Deputies fired Moïse’s second prime minister — Jean Henry Céant — the country still doesn’t have a functional government that can propose a budget to Parliament, ratify accords or approve other measures. Also on the to-do list: Renegotiating a $229 million aid package with the International Monetary Fund and scheduling legislative and local elections.

In reality, Haiti has two prime ministers. There is Michel, who is technically prime minister under the country’s amended 1987 constitution. And there is Jean-Michel Lapin, who officially announced his resignation after Moïse chose Michel on July 22, but remains in charge. Neither one, however, can enter into any legal accords.

Doré said Moïse has done all he was supposed to do, including sending a budget with election funding to the Parliament that was rejected.

“They cannot say he wants to rule by decree,” Doré said. “Since December, to avoid an institutional void, President Jovenel Moïse sent two laws to Parliament. One was to organize a [Permanent Electoral Council] and the other, to vote the electoral law. It has now been seven months since they’ve been sitting in Parliament.”

But while Parliament is not without fault, many blame Moïse for the country’s woes.

“I don’t see where President Jovenel Moïse is going with the country, and in particular with the 11 million people who are living in extremely precarious conditions,” said Auguste D’Meza, a political analyst. “We are no longer in poverty, we left that long ago. We are now in misery. It reminds me of the 1991-94 coup d’etat period when there was a huge movement of boat people, and one of them was asked why risk your life at sea. He said, ‘Because the teeth of a shark are sweeter than misery.’

“Today, the teeth of a shark are sweeter than the humiliation, the sticks and punishment our people are suffering in the Dominican Republic...the Bahamas, the Turks and Caicos,” said D’Meza, referring to the ongoing migration of Haitians trying to leave. “Every week there is a U.S. Coast Guard cutter repatriating Haitians in Cap-Haitien. And we are busying focusing on a prime minister who isn’t going to pass, and the president knows he’s not going to pass.”

Michel, a mid-level government employee, worked in the ministries of agriculture and of finance, and has been described by Lower Chamber President Gary Bodeau as a compromise candidate after Bodeau and Senate President Carl Murat Cantave objected to Moïse’s original choice to replace Lapin. Political analysts say Michel — whose thin resume includes seminars like a three-week course in development training at Illinois State University — may have the votes in the Lower Chamber, but faces a tough battle in the Senate.

There, Michel, 38, faces staunch opposition from senators insisting on Moïse’s resignation after his implication in a Venezuelan aid corruption scandal involving the PetroCaribe oil program. There is also opposition from others in the chamber who take issue with Moïse’s choice, and with the make up of the new cabinet. While Doré, for example, lauds the cabinet’s 50-percent female makeup and its sizable number of young ministers, others have criticized it for its lack of political and managerial experience. They also say it does not reflect the kind of consensus government Haitians have called on Moïse to appoint to break the ongoing stalemate.

In addition to costing Haiti more than $200 million in IMF loans, the persistent political crisis has also cost the country much more. Millions in other foreign aid, local tax collections and foreign direct investments have been lost. The absence of an electoral law means elections that are constitutionally mandated for October will now have to be postponed.

Meanwhile, the domestic currency, the gourde, continues to depreciate. Skyrocketing interest rates on loans, credit cards and mortgages are hovering at rates as high as 36 percent annually, and local businesses, already facing rising costs, are seeing their shipments hijacked on national roadways by a proliferation of criminal gangs.

“There are problems everywhere,” said D’Meza, who had a warning for Moïse’s PHTK political power if they assume they will be allowed to have one-man rule in January: “If the power-base of PHTK thinks that they will run the clock down in their favor so that we arrive at the second Monday in January with no chamber of deputies and 10 senators gone, so that they can rule by decree...then I don’t know where we are going to end up as a country.”

In recent days, the drumbeat of opposition protests that had been roiling the country since last July, when a gas hike triggered days of rioting, have been replaced with drunken debauchery, bikini festivals and “car wash” parties in the streets of Port-au-Prince. But political tensions remain.

On Wednesday, the Lower Chamber of Deputies will hold impeachment hearings against Moïse, for what Descolines and other opposition lawmakers are calling “crimes of high treason,” centered around what they describe as flagrant violations of the constitution. The 119-member chamber will need 80 votes in favor of impeachment, which Doré called a political play with no merit.

Meanwhile, Michel, the nominated prime minister, faces his own controversy after a series of controversial tweets surfaced on one of three Twitter accounts bearing his name and image.

The strongly opinionated tweets, which Michel has denied writing, portray him as a right-wing conservative who loves Donald Trump, prefers Venezuelan leader Juan Guaidó over Nicolás Maduro and despises the Haitian opposition, which he regards as “thugs, bullies and outlaws.” Tweeting in English, French and Creole, he once called on Maduro to “step down,” while in another tweet, attacked the Haitian press.

“The majority of Haitian journalists and political commentators are thugs and socialists,” he tweeted in March. A month later the Twitter account, which has since changed names after the country’s daily newspaper, Le Nouvelliste, brought them to light, dropped a tweet attacking two of the press’ best known media personalities.

“Those tweets, whether they are his or not, are not helping his cause,” said lawmaker Jerry Tardieu, who like others questioned why Michel never said anything until now about an account created in 2009. “I don’t think he’s the right guy for the job right now.... The country needs a high profile personality who inspires trust and confidence, who can network his contacts to appease the situation and appeal for a real national dialogue.”

Likening Haiti’s current reality to a cancer, Tardieu said in picking Michel, it’s as if the president, who appears to have a penchant for low-profile, inexperienced prime ministers, is “using a Band-Aid, when we need a serious surgical operation.”

Gervais Charles, a lawyer who was once part of the movement that deposed Haitian President Jean-Bertrand Aristide in 2004 before becoming his attorney, said he sees political history repeating itself with Moïse, as his opponents expand to include former allies, business leaders and intellectuals.

“I don’t think he will be able to put a government in place easily,” said Charles, as he checked off a list of controversies enveloping Moïse’s administration in recent weeks. Among them: the implication that a pro-Moïse senator, Garcia Delva, was involved in a kidnapping; the massacre in La Saline that implicated two of the president’s appointees, who despite the allegations, remain in their jobs, and the economic malaise that continues to sweep the country.

“There is just too much out there,” Charles said, reflecting on the relative calm. “It is when you see the Haitian people most tranquil that they become the most dangerous.”