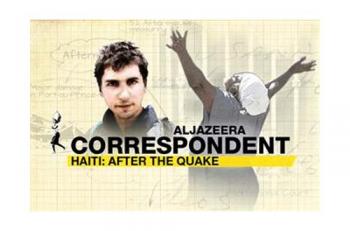 Al Jazeera's Sebastian Walker asks why a system that was designed to help Haitians ended up exacerbating their misery. A new, very moving, 47-minute documentary film by him has been airing since September 15, 2011 on the Al Jazeera Network. Haiti: After the Quake tells the story of a weak, ineffective and militarized response to the earthquake disaster. You can watch the film here on the Al Jazeera website.
Al Jazeera promo: Al Jazeera's Sebastian Walker was sent to Haiti to cover the aftermath of the devastating earthquake that rocked the tiny island nation in January 2010. His assignment was to last two weeks, but he was there for more than a year. He saw firsthand how Haitians dug up their dead from the rubble with their bare hands. He witnessed people struggling to recover from an earthquake, violent weather and disease. Millions throughout the country were made homeless.
More than a year later, millions of Haitians are still living in makeshift camps, cholera has become an epidemic and the aid money has run out. Many Haitians feel abandoned after one of the most tragic chapters in the country's history.
Sebastian Walker revisits many of the people he met at a time when Haiti was deep in crisis to examine how the country has coped since the earthquake struck. Where have things gone wrong since the international community promised to 'build Haiti back, better'? This film examines why a system that was designed to help actually ended up exacerbating the misery and how aid efforts created a state of over-dependence.