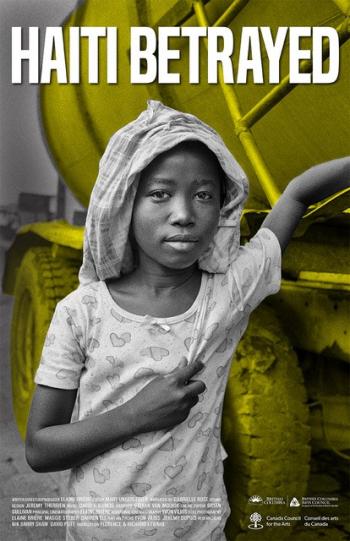 “Without the intervention of Canada, France, and the United States,” explained Serge Bouchereau, a Montreal-based Haitian democracy activist, “the Haitian elite could never have reversed the democratic process in which the Haitian people were engaged,” referring to the 2004 coup d’état which overthrew duly elected President Jean-Bertrand Aristide.

Interweaving interviews of Haitian and North American activists, scholars, lawyers, journalists, and aid workers with stunning original and archival footage, Brière makes a concise but thorough and devastating analysis of the last four decades of Haitian history and the collusion between Washington, Ottawa, and Paris in Haiti’s domination and exploitation.

She also demonstrates clearly how the troika hoisted neo-Duvalierist politicians Michel “Sweet Micky” Martelly and Jovenel “Banana Man” Moïse to power in 2011 and 2016, effectively setting back the Haitian people’s march toward democracy and sovereignty.

“We got the freedom from slavery,” concluded the late Haitian democracy activist, icon, and intellectual Patrick Élie at the end of the film, speaking of Haiti’s 1791-1804 independence war to attain the French revolutionary ideals of “Liberté, Egalité, Fraternité” (Freedom, Equality, Brotherhood). “But the rest, we didn’t get, and the cry for democracy now is the new definition of the old Haitian dream.”

The film highlights Canada’s evolution from good cop to bad cop in its relationship to Haiti over the past 30 years. “I think that the establishment of the United States has a kind of accord with the establishment of Canada,” explained former Haitian political prisoner and human rights activist Bobby Duval, “where Canada is going to play more of a front role of trying to… dominate this country [Haiti]… and bring it into line.”

Brière examines the emergence of the Duvalier dictatorship, Jean-Claude Duvalier’s fall in 1986, Aristide’s emergence in 1990, the United Nations’ military occupation force known as MINUSTAH, the 2010 earthquake, the cholera epidemic, and the 1991 and 2004 military coups with gritty, moving images which cry out about the Haitian people’s humanity and the inhumanity to which they’ve been subjected.

But the film is never shrill or harping. Its force lies in understatement and the eloquence of its footage, analysis, and interviewees. Excellent editing and music with searing photos by Brière (also a photojournalist), Maggie Steber, Darren Ell, and Donna Decesaire all combine to deliver a powerful emotional punch.

Some of the documentary’s most jaw-dropping lines are uttered by its villains, Haitian bourgeoisie spokesmen like Réginald Boulos and Andy Apaid, or their vassals, putschist“rebel” leaders Guy Philippe and Paul Arcelin.

“Haitians are very, very smart people,” says Charles Henri Baker, an assembly industry magnate and a 2004 coup leader. “They know they want to be like me.”

Brière also pulls back the curtain on the nefarious role played by sacrosanct NGOs like Oxfam, AQOCI, and Development and Peace in the 2004 coup. “Because you had Canadian organizations which had a good reputation, that silenced a lot of the critics within the human rights movement, within the pro-democracy movement, and progressive organizations around the world,” explained human rights lawyer Brian Concannon, Jr., one of the film’s principal voices.

“Haiti Betrayed” is the latest in and makes an important contribution to a growing sub-genre of documentaries which address the coups of the past tumultuous three decades of Haitian history, like “Killing the Dream,” “Rezistans,” “We Must Kill the Bandits,” and “Aristide and the Endless Revolution.”

But with the apparent end of the Trump era and the return of neo-liberal globalists to power in Washington, the film, with its focus on second-fiddle Canada, is exceptionally instructive and timely in understanding the mechanics of inter-imperialist collaboration, usually with UN assistance, in crushing popular uprisings like that which began in Haiti in 1986. As a forerunner of many conflicts and rebellions, Haiti has been a laboratory for this new era of multilateral or “coalition” interventions in many other theaters, including Iraq, Afghanistan, Somalia, and the former Yugoslavia.

For these reasons, “Haiti Betrayed” is an indispensable tool for those who wish to understand the challenges facing not only the Haitian people, but struggling masses the world over.

To mark the 17th anniversary of Haiti’s 2004 coup d’état, “Haiti Betrayed” will be screened for free online on Feb. 28, 2021 at 7:30 p.m. EST, followed by a panel discussion with the filmmaker and special guests. Register at: foreignpolicy.ca/HaitiBetrayed