Haiti, Canada, and the Lima Group 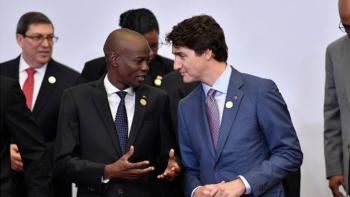 “Qui se ressemble, s’assemble.” The English saying is “birds of a feather flock together.” Translated from Spanish: “Tell me who your friends are, and I’ll tell you who you are.” The folk wisdom that who we hang out with tells a lot about us is reflected in numerous proverbs.

Whatever the language, who Ottawa chooses to hang out with tells us a lot about who Canada is in the Americas. The coalitions/institutions Ottawa is part of in the Americas speak of siding with the rich and powerful, of being part of the U.S. Empire, of imperialism.

Recently Haiti joined the Lima Group of governments seeking to overthrow the Venezuelan government. Instigated by Canada and Peru in mid-2017, the Lima Group has successfully corralled regional support for the U.S.-led campaign to oust President Nicolas Maduro. The coalition has gathered on a dozen occasions — including a third summit to be held in Canada on Thu., Feb. 20  — to develop common positions and strategize on regime change.

Haitian President Jovenel Moïse’s decision to join the Lima Group highlights the influence of another Canadian-sponsored imperial group of friends. Unlike the Trudeau government’s anti-Venezuela positions, Moïse’s steps towards the Lima Group have been controversial in Haiti. When his government first voted against Venezuela at the Organization of American States (OAS) 13 months ago, it stoked the fire of popular discontent that nearly toppled him. Until recently Haiti benefited from the discounted Venezuelan Petrocaribe oil program, which Moïse and his acolytes pilfered, spurring massive protests over the past 18 months. More generally, Haitians overwhelmingly view themselves as anti-imperialist and are proud their ancestors aided South American independence leaders Simon Bolivar and Miranda to defeat Spanish rule.

As popular discontent has grown, Moïse has become increasingly dependent on outside backing. The only reason Moïse is president is because of the so-called “Core Group” of “Friends of Haiti,” which comprises the ambassadors of the U.S., Canada, France, Brazil and Spain, as well as representatives of the EU and OAS. Core Group representatives meet regularly among themselves and with Haitian officials and periodically release collective statements on Haitian affairs.

Last month Radio Canada’s investigative program Enquête pointed out that the Core Group was spawned at the “Ottawa initiative on Haiti.” Held at the Meech Lake Government Resort on Jan. 31 and Feb. 1, 2003, no Haitian officials were invited to the private gathering where U.S., French, OAS, and Canadian officials discussed overthrowing Haiti’s elected government, putting the country under UN trusteeship and recreating the Haitian military.

Since the subsequent Feb. 29, 2004 coup against President Jean-Bertrand Aristide, the Core Group has heavily influenced Haitian affairs. But, taking office two and a half years after the coup, René Préval succeeded in carving out some room to govern independently of the Core Group overseers — joining Venezuela’s PetroCaribe Alliance, for instance — but the January 2010 earthquake devastated the Haitian government. Taking advantage of its weakness, the Core Group pushed for elections to be held months after the earthquake and when their preferred candidate placed third, they dispatched an OAS “Expert Verification Mission” that determined (without offering proof) extreme right-wing candidate Michel Martelly deserved to be in the second-round runoff. In effect, the Core Group employed the OAS to reassert their control over Haitian affairs.

Headquartered in the U.S. capital, the OAS has long been a tool of Washington’s and capitalism’s dominance of the region. A few months ago, OAS electoral observers played an important role in the overthrow of Evo Morales, prompting Bolivia’s first ever indigenous president to label the organization “in the service of the North American empire.” The OAS receives between 44% and 57% of its budget from Washington. Responsible for as much as 12% of the organization’s budget, Canada is the second largest contributor to the 33-nation group.

THE LIMA GROUP AND CORE GROUP ARE WHOLLY ILLEGITIMATE ALLIANCES.

Unfortunately, interventionist/imperialist alliances reinforce each other. A representative of the OAS is part of the Core Group, while the Core Group has driven Haiti into joining the Lima Group. At the same time, the Lima Group’s success in stoking regional opposition to Maduro has enabled the OAS to take ever more hostile positions towards Venezuela’s government. Like a teenager getting involved with the “wrong people,” this circle of “friends” has been a very bad influence. It has encouraged bullying, bribery, and other anti-social imperialist behaviour.

The Lima Group and Core Group are wholly illegitimate alliances. While the Organization of American States is slightly more complicated, progressives shouldn’t hesitate to proclaim, “Canada out of the Lima Group, Core Group, and OAS.”

Protests are being organized for Thu. Feb. 20 and Fri. Feb. 21 in a number of Canadian cities against the Lima Group.