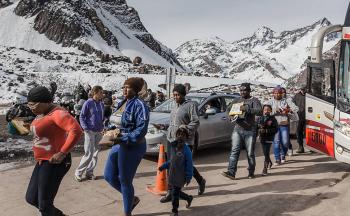 In the last two weeks, many Haitians are being sent home

The Arturo-Merino-Benitez International Airport, located in the Pudahuel municipality of Santiago, Chile’s capital, receives an average of 110 Haitians per day, according to the Chilean Police.

Haitians who leave their native country to settle in Chile do not need visas, but must have, as pocket money, a sum of $1000US, according to the conditions established by the Chilean government for any foreigner wishing to visit.

Besides this condition, Chilean immigration officers have the right to interrogate the visitor about where they are staying, the name of the person receiving them, and other matters.

Chilean authorities are starting to discover the tricks of some agencies from Haiti, which are profiting from the exodus from Haiti to fill their pockets at the expense of the traveler and hotels. For example, some agencies take money from a traveler, giving him the name of hotel where he will stay. But, when the traveler goes to check in, he discovers that he has no reservation at the hotel.

In the past two weeks, many Haitians have been sent home, particularly those in this situation.

These agencies also lend the $1000 minimum to a traveler, and the traveler gives the money to an agent in Chile who comes to greet him at the airport. They also do the shell game another way. As soon as s/he arrives at the airport, the traveler looks for a money-transfer office in the airport and reimburses the money.

In the end, these travelers do not use the money they come with to pay for a hotel or for  pocket money. All of it comes from and goes back to the agency! Instead, they Haitians travel to towns like Quiricula, Pedro Aguirre Cerda, San Bernado, Cerro Navia and others where there is already a Haitian community that welcomes them and will show them how to get by after the 10 hour trip they made in search of a better life.

Faced with this situation, we can expect a harsh response from Chilean authorities who have learned of these maneuvers by the Haitian agencies, especially after Mar. 11 when a new right-wing president takes the reins of power in Chile. The Chilean State could decide at any time to review its migration policy.

Furthermore, it is worth remembering the strong words of the new Chilean President-elect Sebastian Piñera. Before winning the elections with 54% against the Senator and former journalist Alejandro Guiller (45.43%), he declared: "Chile will never become like Haiti."

Formerly Chile’s president from 2010 to 2014, Sebastian Piñera was the first rightist head of state since the end of Augusto Pinochet’s dictatorship in 1990. A billionaire, Piñera is the largest shareholder of Lan Airlines. When he takes the oath of office on Mar. 11, 2018, he will replace the center-left president Michelle Bachelet.

Chile is turning right at a time when the situation of Haitian immigrants, more and more numerous every day, are provoking debate. Haitians have already nicknamed the new president the "Second Trump."

This name speaks volumes about the future of Haitians in Chile.

Translated by Haïti Liberté from the original French, which was published on the website rezonodwes.com.