In Haiti, Core Group lectures on accountability while UN had paid nothing for bringing cholera 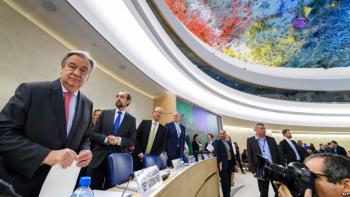 When Haiti's President Jovenel Moïse spoke in the UN General Assembly on September 27 he referred clearly to "le cholera introduit par la MINUSTAH" - the cholera introduced by MINUSTAH, the UN Mission in Haiti, here.But when the UN of Antonio Guterres put on its website a purported summary of Moise's speech, it contained no mention at all of cholera, here.

Call it the ultimate white-wash under Guterres, who has also banned from UNGA, and from the UN as a whole apparently for life, Inner City Press which accompanied and covered the UN Security Council's most recent trip to Haiti and interviewed some of the many victims of the UN. Inner City Press emphasized Guterres' failure on accountability for bringing cholera to Haiti to the Sept 23 New York Post,here. Now on November 2 this from the "Core Group," sent out by the UN only in French then auto translated below:

"The Core Group (composed of the Special Representative of the UN Secretary-General, the Ambassadors of Germany, Brazil, Canada, Spain, the United States of America, France, the European Union and the United Special Representative of the Organization of American States) was established in 2004 to promote dialogue with the Haitian authorities and to contribute to effective action by the international community in Haiti.

As friends of Haiti, the members of the group welcome the commitment of the Haitian people, especially the youth, and civil society to democratic values. This commitment was reflected in the mobilization of last October 17, to demand that light be shed on the management of public funds. The Core Group takes note of the will expressed by the Haitian authorities to act in this direction.

The group praises the professionalism demonstrated by the National Police of Haiti as a whole on this occasion to guarantee freedom of expression while preserving public order. While new demonstrations are announced, the Core Group also expresses its firm rejection of any violence perpetrated on the sidelines of demonstrations. The members of the group recall the democratic legitimacy of the government of Haiti and elected institutions and that in a democracy, change must be through the ballot box and not by violence.

The Core Group calls on the three branches of power and all other actors in national life to engage in an inclusive dialogue to, inter alia: strengthen national institutions responsible for accountability and the fight against corruption, including judicial system ; to adopt a budget for the 2018-2019 fiscal year based on realistic forecasts and taking into account the demands expressed by the population for better access to basic social services; and to develop an electoral calendar that allows the holding of credible, free and transparent elections in October 2019 and ensures the stability of the institutions."

On October 7 from Guterres' spokes- / hatchet-man Stephane Dujarric: "The Secretary-General is saddened to learn of the tragic loss of life and injuries caused by the earthquake in north-west Haiti on 6 October. The Secretary-General extends his condolences to the families of the victims and to the Government of Haiti. The United Nations stands ready to support the Government of Haiti in the response efforts."

Some says, Ready to help? With what, cholera like after the big earthquake, and then not paying a penny? We'll have more on this.

The International Monetary Fund after a visit to Haiti on June 20 announced that “the IMF welcomes the government's intention to eliminate fuel price subsidies." And on July 6 after the government announced price increases of 38 percent to 51 percent for gasoline, diesel and kerosene, protests broke out.

Protesters were shot and killed by police in the Delmas area of the capital and elsewhere. On June 14, Jack Guy LafontantJack Guy Lafontant resigned as Haiti’s prime minister. This two days after the UN Security Council, which has yet to ensure any recompense for Haitian families harmed by the cholera the UN brought killing 10,000 people, said on July 12 -- when Secretary General Antonio Guterres neither mentioned nor was asked about Haiti in his Press-less press conference (Inner City Press remains unjustly banned from the UN but asked the IMF about it, here).

The UN banned Inner City Press, so it could not ask the question on July 16. Fox News story here ("UN roughs up, ejects, bans reporter from headquarters: Caught on tape"); petition to Guterres here; GAP blogs I and II(“Harassment of US Journalist Intensifies at the UN”).  Guterres through Alison Smale made it a lifetime ban onAugust 17, with no due process.

On August 1, the UN named an AFRICOM hand as its rep in Haiti replacing the PNG-ed Susan Page: "United Nations Secretary-General António Guterres announced today the appointment of Helen Meagher La Lime of the United States as his Special Representative for Haiti and Head of the United Nations Mission for Justice Support in Haiti (MINUJUSTH)." An on September 17, finally this from La Lime: "The Special Representative of the United Nations Secretary-General and head of the United Nations Mission for Justice Support in Haiti (MINUJUSTH), Ms. Helen La Lime, welcomes the ratification by the Parliament of Prime Minister Jean-Henry Céant General Policy Declaration and his installation in office today. Ms. La Lime also wishes to commend the efforts by S.E.M. President Jovenel Moïse, the President of the Senate, Mr. Joseph Lambert, and the President of the Lower Chamber, Mr. Gary Bodeau, that led to a constructive dialogue between the Executive and the Legislative and allowed an agreement for the installation of the new Prime Minister and his Government to be reached. The head of MINUJUSTH reiterates the United Nations’ commitment to continue its partnership with the Haitian authorities to implement the Mission’s mandate as part of the exit strategy, built in collaboration with national authorities, for a transition toward a United Nations presence in the country without peacekeeping operations by the end of 2019. Ms. La Lime encourages all stakeholders to continue their efforts in strengthening the rule of law institutions in the country, consolidating the professionalization of the National Police of Haiti, promoting and protecting human rights, as well as fostering sustainable economic and social development, within the framework of President Moïse’s seven priority axes and the Sustainable Development Goals (SDGs)." What about the UN's shameful role in bringing cholera to the island, paying not a penny? On July 16, while awaiting the "investigation" the UN promised, Inner City Press e-mailed Guterres' deputy spokesman Farhan Haq, "Haitian Prime Minister Jack Guy Lafontant resigned, after civilians were killed protesting fuel price subsidy cuts. Again, that is the comment of UNSG and the UN Mission, given what the UN has done there including by introducing cholera and not paying reparations of any kind?"

First there was no answer - Haq couldn't have been busy, with Inner City Press banned there were only four questioners in the day's noon briefing. So Inner City Press asked again, cc-ing Guterres' Deputy Amina J. Mohammed and his Communicator Alison Smale, among others. Haq replied, "your email has been received and we are following up on answers." But by the end of the day, as Inner City Press covered a court hearing about convicted UN bribery Ng Lap Seng, nothing.

Now 23 hours after the question was asked -- and after the incommunicador Global Communicator of Antonio Guterres has received detailed questions from the Government Accountability Project - this, from Haq: "On Haiti, we have the following: As expressed by the Core Group in their 9 July communique, the UN expresses concern for the violent nature of the protests and condemns all acts leading to the unnecessary loss of life and destruction of property. The UN encourages all parties in Haiti to exercise restraint and respect the constitutional order, and urges national authorities to engage in an inclusive dialogue with all other key actors, in order to restore calm, promote social cohesion and ensure the safety of people and properties. The UN takes note of the recent resignation of the Prime Minister."

The IMF added, "The IMF mission was hosted by Mr. Jude Salomon, Minister of Economy and Finance and Mr. Jean Baden Dubois, Governor of the Bank of the Republic of Haiti."