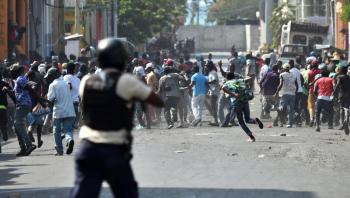 Hector Retamal / AFP | Demonstrators flee as Haitian Police open fire, during the clashes, in the centre of Haitian Capital Port-au-Prince, February 13, 2019, on the seventh day of protests against Haitian President Jovenel Moise.

Haitians took to the streets of the capital Port-au-Prince’s once again on Wednesday to demand the resignation of the country’s President Jovenel Moïse as tensions continue to mount after a week of demonstrations marked by violent clashes with the police.

According to AFP, a young man died at a crossroads near the presidential palace in Port-au-Prince and a Haitianjournalist was wounded by gunshots during crossfire between police and protestors.

The former French colony has been mired in a political crisis since February 7 that has left at least seven people dead and everyday life in the largest towns paralyzed by protests and barricades.

Demonstrators, who come mostly from poor neighbourhoods, are demanding Moïse’s resignation over graft scandals and for failing to tackle widespread poverty.

“This government is seen as incapable of tackling the economic crisis or the corruption,” said Jake Johnston, researcher at the Center for Economic and Policy Research (CEPR) and author of its Haiti: Relief and Reconstruction Watch blog.

"It's a popular uprising. Haitians are occupying the streets to make it clear that Jovenel (Moïse) has no choice but to resign," said demonstrator Prophete Hilaire, who was marching across the capital. "A government that cannot give its people nourishment and water must step down," he added.

Haiti is the poorest country in the Americas and one of the poorest in the world, with three-fifths of the nearly 11 million population living below the national poverty line of $2 a day. According to a United Nations Office for the Coordination of Humanitarian Affairs report in July 2018, some 1.3 million Haitians depend on food assistance.

Each year, thousands of young people flee as illegal migrants, including to nearby Bahamas and the Turks and Caicos islands.

On January 2018, the country earned the unwanted distinction of being included in US President Donald Trump's list of “shithole countries”.

But poverty levels have been exacerbated by plummeting economic conditions in recent years.

“Since 2016, the country has faced a two-digit inflation, the national currency lost half of its value over the course of the last four years. And half of this decline actually happened last year,” Johnston said.

The current demonstrations kicked off when Moïse found himself at the heart of a corruption scandal over the Petrocaribe fund, under which Venezuela supplied Haiti and other Caribbean and Central American countries with oil for years at cut-rate prices and easy credit terms.

Investigations have shown that nearly $2 billion intended for development projects were misused from the program. In January, a report on the case revealed that a company, then headed by Moïse, was a beneficiary of funds from a road construction project. The company never a signed contract, according to the report.

Moïse is not the only Haitian leader to have seen his legitimacy disputed.

According to Johnston, “there is a crisis of legitimacy concerning Haitians politicians who weren’t able to respond to the population’s needs”. Moïse’s case is even worse.

Haiti’s current president only came into power in 2017 after a second poll, the first one having been cancelled over reports of massive fraud. “When the second election took place, less than 20 percent of the voters showed up. Even though no irregularities were found during the second ballot, such turnout rate could never lead to a stable term,” Johnston added.

Although many protestors have been killed in the current turmoil, Moïse and his prime minister have remained dead silent. Neither has reacted to the latest events, despite the violence sometimes breaking out only a few metres from the presidential palace.

FRANCE 24’s Amélie Baron reported from Port-au-Prince that “no solution has been put forward for now. But the authorities will have to take decisions, because the anger of the people is only growing”.

A crisis destined to last

“Ignoring once again the people’s legitimate demands is a guarantee that the crisis will last a long time,” Johnston agreed.

“Authorities seem to blame the turmoil on a political opposition willing to seize power. They presume that it will run short of money and the movement will then cool down and the country will be calm again.”

Authorities are also counting on October 2019’s legislative elections to ease the tension. But “it would be very naive to think that these elections alone can solve this crisis,” said Johnston.

Even a political dialogue with the opposition might not help, for “there is not even one credible leader who is in position to control the demonstrators by himself”, Johnston noted, adding that there will only be progressive talks when “civil society” takes its place at the negotiating table.

This article was adapted from the original in French by Henrique Valadares.