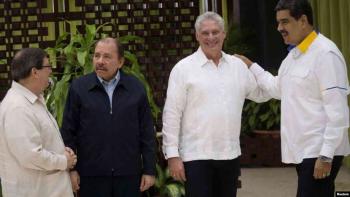 On Sat. Dec. 14, Venezuelan President Nicolas Maduro announced that his country will relaunch in the first half of 2020 the PetroCaribe program, which from 2005 to 2018 provided inexpensive Venezuelan crude oil to 17 Caribbean and Central American countries, including Haiti, with generous long-term payment plans.

Due to U.S. economic and banking sanctions against Venezuela, a Washington-sponsored coup attempt escalated in 2017, and the world market’s petroleum glut resulting from environmentally destructive fracking in the U.S., the flow of PetroCaribe crude was suspended in 2018 to its beneficiary nations, except Cuba.

However, the renewed PetroCaribe deal will not be extended to countries which are “at war” with Venezuela, Maduro announced. One of those countries is Haiti under the leadership of President Jovenel Moïse.

Maduro made the declaration in a speech at the 17th Summit of the Bolivarian Alliance for the Peoples of Our America (ALBA), held this year in Havana, Cuba, which was attended by other heads of states including Cuban President Miguel Diaz-Canel, Nicaraguan President Daniel Ortega, and the prime minister of St. Vincent and the Grenadines, Ralph Gonsalves.

During 2019, Moïse’s government has been at the forefront of the diplomatic assault against Venezuela’s elected government. On Jan. 10, Haiti flipped in a vote at the Organization of American States (OAS), joining Washington, Canada, and 16 other OAS member states to say it did “not recognize the legitimacy of Nicolas Maduro’s new term.” The Venezuelan president had been elected with 68% of the vote in an internationally observed May 2018 election. In 2017, Haiti supported Venezuela, and in 2018, it abstained, in similar OAS votes targeting Maduro’s government.

On Jun. 27, Haiti again voted with Washington at the OAS, this time to recognize opposition figure-head Juan Guaidó as Venezuela’s president. Haiti had also voted to recognize Guaido’s ambassador to the OAS on Apr. 9.

But Haiti intensified its hostility against Venezuela on Sep. 11 when it joined Washington and nine other Latin American and Caribbean Washington-allies in branding Venezuela “a clear threat to peace and security” in the hemisphere, under the resuscitated Inter-American Treaty of Mutual Assistance (known as TIAR or the “Rio Treaty”), which dates back to 1947, before the OAS’s formation. It was the first TIAR meeting in 18 years.

The TIAR is a sort of Latin American-NATO, formed to provide cover for U.S. aggression in the hemisphere. The treaty’s Article 6 provides the justification, stating that if any “fact or situation might endanger the peace of America,” the 16 member body would take measures “for the common defense and for the maintenance of the peace and security of the Continent.”

Seeing it as a rubber-stamp for U.S. intervention (which currently looms over Venezuela), most of Latin America’s progressive governments – Cuba, Bolivia, Ecuador, Nicaragua,  Mexico, Uruguay, and Venezuela – quit the body over the past decade. Juan Guaido’s pseudo-government, seconded by Venezuela’s National Assembly, rejoined the body this year, prompting the Sep. 11 vote and making TIAR membership 17, if one counts the rump Venezuelan presence.

On Dec. 3, Haiti, along with 12 other TIAR members, banned President Maduro and 29 other Venezuelan government officials and their families from traveling inside its borders. Maduro called the TIAR assembly a “meeting of puppets, of clowns.”

“I reject the imperialist attempt and the attempts of these North American allies to come and involve themselves in Venezuela’s internal matters,” said Diosdado Cabello, one of those sanctioned as the vice president of Venezuela’s ruling Socialist Party and a member of the National Assembly. “Venezuela demands respect.”

The renewal of the PetroCaribe program comes after Russia has assisted Venezuela with capital and technicians in revamping its petroleum facilities, boosting oil production.

“PetroCaribe’s relaunch is also a response to the U.S.-backed coup d’état in Bolivia,” explained William Camacaro, the head of the Venezuelan Bolivarian Circle in New York. “Having lost a close friend with Evo Morales’ overthrow, the Venezuelan government sees it as very important to support its Caribbean and Central American allies, especially when Washington is trying to isolate and attack Venezuela through bodies like the OAS, the TIAR, and the Lima Group,” a 14-member gaggle of Latin American and Caribbean nations following Washington’s lead on Venezuela.

As in Bolivia, Washington attempted a coup this past month in one of Venezuela’s key Caribbean allies, Dominica.

“Dominica’s prime minister warned today of an attempted coup by the [OAS] in retaliation against the nation’s opposition to U.S. policy on Venezuela,” reported the London-based Morning Star on Nov. 28. “Prime Minister Roosevelt Skerrit accused OAS chief Luis Almagro of “leading a campaign” of incitement against his ruling Dominica Labor Party [DLP], warning that certain member states were being targeted. He insisted that the OAS was on a “crusade” to “delegitimize his government” as punishment for consistently voting against interference in the region, particularly on the body’s resolutions against Venezuela.”

The coup in Dominica has so far been unsuccessful. Skerrit won an unprecedented fifth consecutive term on Dec. 6, with the DLP taking 18 of the Parliament’s 21 seats. He was sworn in for his new term as Prime Minister on Tue., Dec. 17.

Dominica was a PetroCaribe fuel recipient.

Most Haitians are disgusted with the treacherous stand Jovenel Moïse’s government has taken against Venezuela. Haiti’s masses recognize and appreciate Venezuela’s exemplary solidarity.

In November at the closing ceremony of the International Congress of Afro-Descendants in Caracas, former Haitian senator Moïse Jean-Charles, the leader of Haiti’s Dessalines Children (Pitit Desalin) party, apologized to President Maduro for Haiti’s voting against Venezuela in the OAS.

“I cannot speak without apologizing to the Venezuelans and President Maduro,” Jean-Charles said to the vast outdoor rally and thunderous applause, making Maduro emotional. “On behalf of the Haitian people, I apologize to you, Mr. President, for the Haitian government’s vote against your country at the OAS. We apologize to the entire world… For nothing in the world should Haiti ever vote against Venezuela. It’s a matter of life and death.”

Jean-Charles also saluted the “resistance” of Nicolás Maduro in the face of Washington’s aggression.

Jovenel Moïse’s betrayal of Venezuela has been one of the motive forces behind the massive nationwide insurrection calling for his resignation since July 2018, when his government tried to raise fuel prices following PetroCaribe’s cut-off.

From 2008 to 2018, Haiti had a very sweet PetroCaribe deal. It received almost all its petroleum – some 20,000 barrels a day – from Venezuela and sold it through a specially created state agency called the Office for Monetization of Development Aid Programs (BMPAD). Over that decade, Venezuela provided Haiti about $4.3 billion in oil, but Haiti only had to pay for 60% upfront. The other 40% went into the PetroCaribe Fund, repayable after 25 years at 1% interest.

Haitian government administrations mostly squandered close to $2 billion of PetroCaribe funds, which were supposed to be used for projects to aid Haiti’s people, like schools, hospitals, and infrastructure. The government of Jovenel Moïse’s predecessor and mentor, Michel Martelly, burned through about three-quarters of the funds, funneling millions to Moïse’s companies, thereby helping him become president.

In addition to demanding that Moïse step down, demonstrators have a central slogan asking “Where is the PetroCaribe money?” and want a trial of those who stole it.

Earlier this year, Haiti’s Central Bank (BRH) still held in an escrow account about $80 million of oil revenues belonging to Venezuela. In February, Jovenel hired eight foreign mercenaries to steal the money and transfer it to an account he controlled. The heist was foiled when Haitian police captured seven of the mercenaries, but they were freed by U.S. Embassy intervention and never prosecuted.

Despite Haiti’s reversal, most nations of the Caribbean Community (CARICOM) – the principal beneficiaries of the PetroCaribe Alliance – have maintained their solidarity with Venezuela.

“Heads of Government reaffirmed their guiding principles of non-interference and non-intervention in the affairs of states, respect for sovereignty, adherence to the rule of law, and respect for human rights and democracy,” stated a Jan. 25 CARICOM declaration in response to the OAS’s Jan. 10 vote. The Caribbean leaders “called on external forces [i.e. the U.S. and OAS] to refrain from doing anything to destabilize the situation and underscored the need to step back from the brink…”

Additional reporting by Joe Emersberger, a freelance journalist who has written for Telesur and Haiti Analysis.