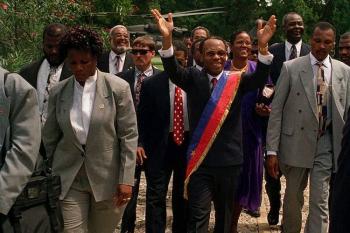 The most dramatic intervention took place in 2004, after the coup d’état against the democratically elected President Jean-Bertrand Aristide. Camille Chalmers, executive director of the Haitian Platform to Advocate Alternative Development, a civil society organization network, said in 2019 that a domestic political conflict was used as the pretext.

The coup was carried out by ex-military personnel whose forces had been dissolved by Aristide in 1995. Backed by the United States, Canada and France, the army of the coup entered from the Dominican Republic and marched to Port-au-Prince.

After Aristide’s forced exile, interim President Boniface Alexandre requested the first deployment of a Multinational Interim Force. Composed of Canadian, French, U.S. and Chilean soldiers, this force would be the seed of the future United Nations Stabilization Mission in Haiti (MINUSTAH). Both the request and the occupation itself contravened Haiti’s 1987 Constitution; only the National Assembly has the power to make these decisions, but it was circumvented by Alexandre.

Since the creation of MINUSTAH, a series of euphemisms have emerged to justify the occupation, such as ‘suspension of sovereignty,’ ‘humanitarian interventionism,’ and ‘pacification.’ In practice, pacification implied an exercise of selective political repression, the perpetration of various sexual crimes, and the propagation of a cholera epidemic from a MINUSTAH base that claimed 10,000 lives and infected more than 800,000 people. This was belatedly acknowledged by the then UN Secretary-General Ban Ki-moon, who also apologized for the UN’s response to the cholera outbreak.

The creation of MINUSTAH took place in the context of the international agenda being shaped by the rhetoric of ‘security’ and ‘terrorism.’ Since the fall of the Soviet Union and the decline of the Non-Aligned Movement, the Security Council developed an increasingly discretionary character and the powers of the UN General Assembly were reduced. In turn, Chapter VI of the UN Charter, which refers to the peaceful settlement of disputes, was increasingly displaced by Chapter VII, which provides for the imposition of so-called “peace enforcement” and the deployment of the UN’s Blue Helmets, as the peacekeepers are known.

On the other hand, a new international legal paradigm began to impose itself: that of “humanitarian interventionism” and the “responsibility to protect,” also known as R2P. As Leyla Carrillo Ramírez, a Cuban jurist and specialist in international relations, writes in her book Metáforas de la Intervención, these are forms of “coercive foreign intervention.” These, Ramírez says, contradict the principles of sovereignty and self-determination of nations, even when they are protected by the real or alleged violation of the human rights of local populations.

Brazil: The ‘Principle of Non-Indifference’ and Geopolitical Aspirations

In 2004, Brazil took charge of the military command of MINUSTAH, in addition to being the country that provided the largest military contingent: 1,670 soldiers at the beginning of the mission.

The guiding principle of Brazilian diplomacy was that of ‘non-indifference,’ a sort of local variation of R2P. This edge of the South American giant’s foreign policy was accompanied by its willingness to influence international policy in line with its character as an emerging country, a dynamic member of BRICS and a sub-regional power.

Brazil led the policy of population control in working-class neighborhoods such as Bel Air and Cité Soleil in Haiti. In Cité Soleil, an armed intervention took place in 2007 that killed at least 27 civilians and left 30 wounded, according to the testimonies of the inhabitants and the complaint filed with the Inter-American Commission on Human Rights (CIDH). However, according to a special dossier of the Igarapé Institute and the Brazilian Peace Operations Joint Training Center, the official self-evaluation would be extremely laudable, qualifying the Brazilian performance in Haiti as a “military epic.”

The other reason for Brazilian participation had to do with the direct negotiations established between the Brazilian, French and U.S. governments. According to Ricardo Seitenfus, former special representative of the Organization of American States in Haiti, former U.S. President George W. Bush had promised the Brazilian government a permanent seat on the UN Security Council in exchange for taking over MINUSTAH.

Argentina and the Relegitimization of the Armed Forces

As in the entire Southern Cone, the Argentine Armed Forces were involved in state terrorism and the coordinated repression of Operation Condor in the mid-1970s. But only in Argentina would the military reach such a level of discredit, brought about by factors such as the defeat in the Malvinas War and the emergence of a powerful human rights movement.

Argentina’s participation in the UN missions was due to an attempt to re-function and re-legitimize the forces in a democratic context, according to Argentina’s Presence in Haiti, a book by authors affiliated with the National University of Quilmes and Argentina’s Ministry of Defense. In fact, a working document of the Frente de Todos, a coalition of political parties in Argentina, presented in October 2019 referred, in its section on foreign policy, to the need to strengthen Argentina’s presence in peace missions, and referred to the country’s experience of participating in MINUSTAH.

Argentina’s Presence in Haiti highlights the enormous deficits in the training of the troops sent to Haiti. These include the incompatibility between military training and the assumption of police tasks, the complete lack of knowledge about local reality and culture, and the practical absence of training with a gender perspective. This is particularly relevant in the case of troops who served where there were high levels of social vulnerability and who later committed numerous sexual crimes according to numerous investigations and reports.

Haitian sociologist Sabine Lamour said in an interview that feminist and women’s organizations have observed many cases of sexual abuse in locations such as Bombardopolis, Port-Salut, Gonaïves and Port-au-Prince, despite the fact that both the national government and foreign embassies showed no interest in tracking down the cases.

One year after the end of the last mission in Haiti, the Latin American nations—with the exception of Cuba and Venezuela, who abstained from participating—have yet to make a complete and joint assessment of the 15 years of occupation of the country. Nor have they offered a satisfactory response or policies of reparation to the victims of this extensive and costly unilateral war. [IDN-InDepthNews – 02 November 2020]

* This article was produced by Globetrotter. Lautaro Rivara is a sociologist, researcher and poet. As a trained journalist, he participated as an activist in different spaces of communications work, covering tasks of editing, writing, radio broadcasts, and photography. During his two years in the Jean-Jacques Dessalines Brigade in Haiti he was responsible for communications and carried out political education with Haitian people’s movements in this area.