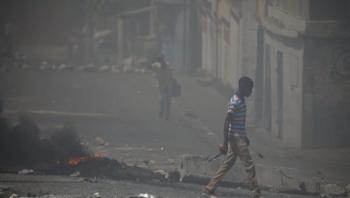 Man walks through smoke during a protest in Haiti on July 9. | Photo: Reuters

After deadly protests in Haiti broke out to reject a hike on fuel prices, the IMF insists Haiti must eliminate subsidies as part of their agreement.

On Friday the ministries of finance, economy, commerce, and industry announced an increase of 38 percent in gasoline prices, 27 percent in diesel prices and 51 percent in kerosene. The price hikes had been scheduled to go into effect last Saturday, but popular uproar stopped its implementation.

“We will continue to support Haiti and help the authorities as they develop a revised strategy,” Gerry Rice, IMF spokesperson said Thursday.

According to Rice the “revised strategy” will include a “much more gradual approach to eliminate subsidies.”

The government has argued that the subsidies benefit neighboring Dominican Republic and the country’s wealthy. However, the subsidy-elimination policy did not target wealthy Haitians, businesses or smugglers.

The IMF stressed that eliminating subsidies on fuel could liberate resources to finance social services and programs, but Haitians oppose the elimination fearing an increase in fuel prices will translate into an increase in all other goods.

According to the World Bank, almost 60 percent of the population lives below the national poverty line and 24 percent are below the extreme poverty line.

After transport unions paralyzed their service on Monday and Tuesday to protest the measure, the country has struggled to get back to normality. On Saturday, the prime minister will address Congress, which will debate whether they maintain the vote of confidence in his functions.

The elimination of subsidies on oil derivatives is part of an agreement Haiti signed with the IMF in February to access a three-year, $69.7 million loan program.

Other conditions imposed by the IMF include cutting Haiti’s fiscal deficit to 3.25 percent of its GDP. Last year the fiscal deficit was 7.5 percent of the GDP. Regarding these numbers, economists had pointed out that it would be difficult for the government to invest the money saved by eliminating subsidies and other public spendings.