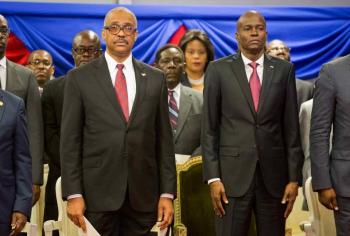 Haiti’s president on Tuesday installed a seven-member high command for the new army, pledging that the force due to have 5,000 soldiers will help the impoverished Caribbean nation recover from natural disasters and rebuild infrastructure.

The country’s army was disbanded in 1995 by then-president Jean-Bertrand Aristide after he returned to power following a coup, leaving the national police responsible for security.

The military’s return has been a divisive topic in a country still suffering from a catastrophic earthquake and a fierce hurricane in recent years. Critics express concern the armed forces would meddle in politics and plunder vital resources.

However, President Jovenel Moise said on Tuesday the new army will respect the rule of law and serve the people.

“We know the military we had left a lot of bad memories in the minds of many Haitians, but this army will be different,” Moise told Reuters after a meeting officers at the headquarters of the army across the street from the presidential palace.

Eventually, the army would reach 5,000 soldiers, Denis told Reuters, saying he would travel to other countries to seek cooperation for developing Haiti’s military. He declined to name the countries.