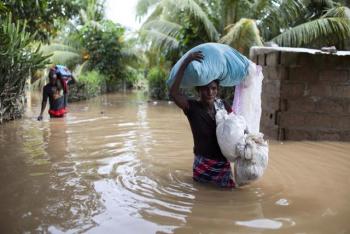 At least one person died, one remains missing, and more than a dozen were injured by the passage of Hurricane Irma off the northern coast of Haiti last week. As of September 11, nearly 6,500 Haitians remain in emergency shelters, according to the United Nations. Preliminary figures suggest that flooding impacted 22 communes, completely destroying 466 houses and badly damaging more than 2,000 more. As veteran AFP correspondent Amelie Baron noted on Twitter, “These are the damages of a hurricane passing hundreds of kilometers away from [the] Haitian coast.”

Compared to some other Caribbean nations, the damage to Haiti’s infrastructure pales. But as Jacqueline Charles reported for the Miami Herald, looks can be deceiving:

Though Haiti was spared a direct hit from Irma and the fallout is nowhere near the magnitude of Matthew’s 546 dead and $2.8 billion in washed-out roads, collapsed bridges and destroyed crops, the frustration and fears for some in its path are no less.

“We didn’t have people who died, but homes and farms were destroyed,” Esperance said. “Just because you don’t see a lot of damages, it doesn’t mean that we haven’t been left deeper in misery.”

Charles reported that “entire banana fields lay in ruin” across Haiti’s northern coast. “It took everything,” one local farmer said. As Charles points out, even before Hurricane Irma, Haiti was facing an extreme situation of food insecurity. Last October Hurricane Matthew swept across the southern peninsula, devastating crops and livelihoods and leaving some 800,000 in need of emergency food assistance. Even before Matthew, the World Food Program reported that Haiti was facing its worst food security situation in 15 years. Charles writes:

As recently as February, the food insecurity unit classified the northwest as being in an economic and food security crisis. As a result, [Action Against Hunger’s country director Mathieu] Nabot said, the focus has to be not just on the emergency response but on supporting farmers over the long term, to help strengthen their economic security and ability to cope with shocks.

Unfortunately, it appears as though little donor ― or Haitian government ― money went to supporting long-term agricultural development after last year’s storm. Less than 50 percent of the UN’s $56 million appeal for food security and agricultural support was ever provided by donors ― and the overwhelming majority of that was short-term emergency food assistance.

Of course, it’s not just the donor community that must do more to support Haitian farmers. Elected on a platform of agrarian development, Haitian president Jovenel Moïse has done little to address the problem since taking office nine months ago. Rumors of the commercial demise of Moïse’s banana plantation, Agritrans ― which was used to bolster his agricultural credentials during election season ― hasn’t helped, nor did putting scarce resources into a caravan across the country. And last week, just hours before Irma’s outer bands began lashing the coast, the Haitian parliament began discussion on this year’s budget. Peasant organizations held a press conference to denounce the fact that just 6.9 percent is allocated to agriculture.

With the increasing likelihood of extreme weather events ― and Haiti’s obvious vulnerability to such events ― many began advocating for donors and the government to take seriously the threat of climate change. According to the 2017 Climate Change Vulnerability Index, Haiti is the third-most vulnerable country in the world. As Mark Schuller and Jessica Hsu note, it’s time to start talking about climate justice ― not just climate change:

Yet the response to Matthew last year, write Schuller and Hsu, was “mostly forgotten, ignored and underfunded.” Weeks, maybe even months, of talk about disaster preparedness, supporting local communities, and sustainable agriculture slowly faded into the background. Just 0.5 percent of this year’s budget is allocated to the Ministry of the Environment. What is needed, argue Schuller and Hsu, is to look to those on the ground already fighting for change in their communities:

Grassroots organizations in Torbeck are doing what they can. Jean Molin of the Lafrisilien Peasants Association denounced that “the government never once came and checked on us,” while Oscar Romero TKL’s Rachelle Moïse critiqued “paternalistic” foreign agencies for “failing to address our needs with their top-down, pre-determined aid.” While their food security continues to be precarious, those living off footpaths in the mountains ― who can still be found living in caves ― fare much worse, with little to no hope of receiving aid or relief.

These are the stories that must be illuminated when we talk about the warming climate, justice, and human rights.

To silence these stories makes us complicit, not just dumb, in the devaluing of human life and the ongoing destruction of our environment.