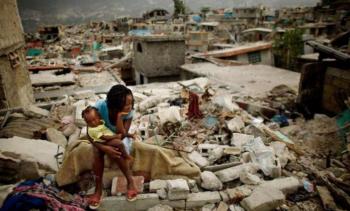 Years since an earthquake of that magnitude struck Haiti: 168

Number of aftershocks, over 4.5 magnitude, in the week after the initial tremor: 51

Total number of government ministry buildings, before the earthquake: 29

Number of government ministry buildings that stood after the earthquake: 1

Number of United Nations troops and police stationed in Haiti, at the time of the earthquake: 9,057

Number of US military personnel sent to Haiti, or stationed on ships off Haiti’s shores, by the end of January 2010: 22,200

Amount pledged by donors for short- and long-term reconstruction at a March 2010 donor conference: $10.7 billion

Percent of $2.4 billion in donor provided humanitarian assistance that went to the Haitian government from 2010 to 2012: 0.9

Billions in humanitarian and reconstruction aid disbursed by donors from 2010 to 2012: $6.4

Percent of that which was disbursed directly to Haitian organizations, institutions or companies: less than 0.6 percent

Percent of US families that donated to earthquake relief efforts: 45 percent

Number of homes destroyed by the earthquake: 105,000

Estimated number of individuals displaced by the earthquake: 1.5 million

Number of individuals evicted from camps for the internally displaced, between June 2010 and March 2011: 230,000

Estimated number of individuals living in damaged or destroyed houses in 2011: 1,036,174

Population of Canaan, an area about 15 kilometers outside of the capital, at time of earthquake: 0

Number of new houses USAID planned to build after the earthquake: 15,000

Miles from Port-au-Prince where the original housing construction site was planned: 8

Number of those 750 houses originally built to earthquake standards: 0

Date by which the two main US contractors involved in housing construction were suspended from receiving US government contracts: March 25, 2015

Percent of that amount that went to contractors inside the Beltway (Washington, DC; Maryland; and Virginia): 54.1 percent

Amount spent in 2012, on lobbying against USAID reforms, by the Coalition of International Development Companies (which includes Chemonics and DAI): $250,000

Date on which the industrial park was inaugurated: October 22, 2012

Number of jobs the State Department promised the new industrial park would create: 65,000

Amount allocated by USAID to build a new port in support of the industrial park: $72 million

Date on which USAID abandoned its plans to support a new port in northern Haiti: May 2018

Minimum number of residents displaced by the construction of the Caracol Industrial Park: 400

Date on which those 400 residents reached an agreement with the IDB and Haitian government on corrective measures, including access to new land: December 8, 2018

Millions of dollars in textiles exported to the United States in 2009: $491

Year in which per capita GDP reached its pre-earthquake level: 2013

Average annual per capita GDP growth in the years since 2013: 0.1 percent

Exchange rate at time of earthquake (Haitian gourdes per US dollar): 40.5

Number of United Nations missions in Haiti since the earthquake: 3

Total number of years that the United Nations Stabilization Mission in Haiti (MINUSTAH) remained in country: 13

Number of those peacekeepers removed from Haiti: 114

Number of those peacekeepers imprisoned: 0

Number of Haitians reporting children fathered by UN troops or other personnel: 265

Minimum number of allegations of sexual abuse and exploitation at the hands of UN troops or other personnel in Haiti, from 2004 to 2016: 150

Number of days it took the United Nations to admit responsibility for introducing cholera to Haiti: 2,129

Official number of cases registered since: 819,000

Factor by which epidemiologist Renaud Piarroux believes this underestimates the death toll: 8

Fraction of that which donors spent in responding to the cholera outbreak: 1/10

Number of Haitians undernourished (three-year average from 2008 to 2010): 5 million

Number of people in Haiti in need of “urgent food assistance” now: 3.7 million

Dollar amount of food exported by Haiti in 2009: $28 million

The cost, in 2010, of purchasing the entire local rice crop to use as food aid: about $70 million

Date on which former US president Bill Clinton apologized for undermining Haiti farmers for the benefit of rice producers in Arkansas: March 10, 2010

Local agricultural production, in metric tons, bought by the World Food Program for food assistance programs in Haiti, in 2018: over 700

Percent of those meals that contain local products: 15

Date on which Hurricane Matthew made landfall on Haiti’s Southern Peninsula: October 4, 2016

Number of years since a hurricane of similar magnitude struck Haiti: 62

Estimated percent of crops destroyed in the Grand’Anse region: 100 percent

Estimated percent of livestock killed in the same department: 85–90 percent

Estimated amount Haiti needed for reconstruction after the hurricane: $2.2 billion

Percent of flash appeal that was funded: 62.1 percent

Number of Haitian presidents since 2010 earthquake: 4

Percent of the 11,181 tally sheets of electoral results that were never counted or never received after the November 28, 2010 election: 12.2 percent

Date on which members of the international “Core Group” threatened then President Rene Preval with forced exile: November 28, 2010

Participation rate in that election: 22.8 percent

Date on which a draft OAS audit of the elections, which recommended changing the results, was leaked: January 10, 2011

Date on which then Secretary of State Hillary Clinton flew to Haiti to pressure the Preval government to change the results of the election: January 30, 2011

Date on which Michel Martelly, who had initially placed third and missed the runoff, was sworn in as president: May 14, 2011

Value of in-kind support that a USAID contractor provided to an organization linked to Martelly’s campaign to clean the streets of the capital before the inauguration: $98,928

Date on which the terms of the entire lower house and two-thirds of the Senate expired: January 12, 2015

Number of political parties that registered to participate in Haiti’s August 2015 legislative elections: 128

Percent of votes that were never counted due to irregularities, including fraud and violence: 25 percent

Date on which Haiti’s first-round presidential election was held: October 25, 2015

Number of candidates participating in the 2015 presidential election: 54

Date on which the planned second-round presidential election was indefinitely called off due to widespread irregularities: January 22, 2016

Number of untraceable votes in the October 25, 2015 election, according to an independent verification commission: 628,000

Date on which a new parliament was sworn in despite the election being canceled at the presidential level: January 11, 2016

Participation in the 2016 rerun presidential and partial legislative election: 18 percent

Number of elected senators arrested and extradited to the US to face drug trafficking charges before taking office: 1

Date on which Jovenel Moïse was inaugurated president: February 7, 2017

Date on which former president Michel Martelly appointed the brother of his political party’s president to lead the agency that controls the Petrocaribe fund: February 3, 2015

Date on which Jovenel Moïse, Martelly’s chosen successor, registered as a presidential candidate: May 21, 2015

Date on which the government authorized $1 million in disbursements from its Petrocaribe account to Agritrans, a company owned by Jovenel Moïse: May 26, 2015

Date on which Gilbert Mirambeau Jr., a Haitian filmmaker, Tweeted a photo of himself, blindfolded, holding a sign asking where the Petrocaribe money is: August 14, 2018

Percent of Haiti’s 10 departments that experienced massive demonstrations on October 17, 2018 asking where the Petrocaribe money is: 90 percent

Minimum number of Haitians killed by armed gangs and corrupt police on November 13, 2018 in the La Saline neighborhood of Port-au-Prince: 70

Date on which Haiti’s Superior Court of Auditors released its first report on Petrocaribe: January 31, 2019

Number of pages in the second report: 612

Number of government officials or private sector actors imprisoned due to Petrocaribe corruption: 0

Number of foreign mercenaries arrested outside the Haitian central bank in February 2019: 7

Days those mercenaries remained in jail before US officials intervened and facilitated their flight back to the U.S.: 3

Fraction of prison population that is still awaiting a trial: 3/4

Number the prison was built to hold: 778

Number of Haitians killed during demonstrations since July 2018: 187

Percent who died from a bullet wound to the head: 22.5

Estimated number of individuals killed in those massacres: 127

Months that Haiti has not had a prime minister ratified by parliament: 10

Date on which Haiti broke longstanding diplomatic precedent and voted against Venezuela at the Organization of American States (OAS): January 10, 2019

Date on which President Donald Trump invited Jovenel Moïse to Mar-a-Lago to thank him for his vote: March 22, 2019

Number of US members of Congress who wrote to the State Department in March 2019 pushing for human rights and corruption accountability in Haiti: 106

Number of civil society and other organizations that signed a document in late 2019 calling for Moïses’s resignation and the formation of a transitional government: 107

Date on which the terms of the entire lower house and two-thirds of the senate expire: January 13, 2020