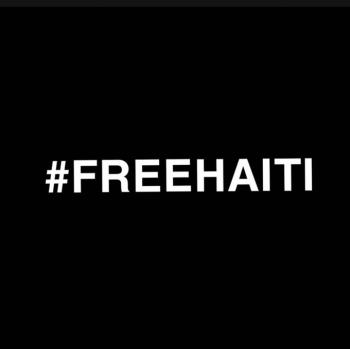 It was born out of collective frustration and helplessness, springing to life in a shocking act of violence: a botched raid on a gang stronghold in a Port-au-Prince slum that left at least four Haitian police officers dead, another missing, and their armored vehicles and high-caliber automatic weapons seized.

Within hours of the ill-fated Friday operation in the Village de Dieu, or Village of God slum, the hashtag #FreeHaiti emerged, riding a wave of anger as videos showed gang members dragging the bodies of two slain cops.

“A generation is taking a beating,” said Chrismy Augustin, 24, a medical student in Port-au-Prince who for days had been signing off his Haiti tweets #FreeHaiti under his handle @LikeChrisss and watched the hashtag go viral over the weekend as Haiti wrestled with its latest crisis. “You feel like the future of the country is dying.”

Taking a life of its own, the #FreeHaiti hashtag has been shared in posts on Twitter more than a half-million times by influencers, ordinary and angry Haitians, Haiti-born celebrities like actors Jimmy Jean-Louis and Garcelle Beauvais, and rappers French Montana, Tyga and Cardi B. The Grammy winner tweeted under her @iamcardib handle, “When ya see third world countries or countries that can be more developed don’t blame the people of the country….Blame the government.”

In the process it has become a vehicle for those in and outside the country to show their support for the Haitian people amid the country’s deepening political turmoil and mounting violence; a chance to offer firsthand accounts of life in Haiti, and to explain why they do not believe Haiti is “free.”

“Because NO MOTHERS should have to beg murderers/politicians to give them back their [child’s] body ON NATIONAL RADIO. NO MOTHERS #FreeHaiti,” the Haitian actress Gessica Geneus said, referencing a video of the mother of one of the slain police officers begging for gang members to return her son’s corpse.

An infographic, put together by the anti-corruption grassroots activist group Nou Pap Dòmi (We Aren’t Sleeping) for Augustin, sought to explain the movement in four graphs and what people can do. One of the graphics, titled “Why do we say #FreeHaiti?” explains why Haiti, the first country in the Americas to break the bondage of slavery, needs to be liberated: “There is no parliament, no elected local officials, the judiciary system is under attack, the president wants to change the constitution and hold elections while gangs control many parts of the territory. There is a surge in kidnappings at a scale never seen before.”

For-ransom kidnappings have increased by 200% in the last year, according to the United Nations, armed gangs are growing in influence and an ongoing standoff between the president, Jovenel Moïse, and activists over when his term ends is fueling a new round of protests. Many fear that Moïse, who has been ruling by decree for over a year, is on the verge of becoming the newest strongman in the Americas.

Moïse came to power in 2017. He has insisted that he has another year in office and has blamed opponents and the oligarchy for his problems. But many Haitians blame him, and a long line of politicians for the country’s ill fate.

“Between the rage in me and a bullet, I don’t know what will kill me first. #FreeHaiti,” Haitian comedian and feminist activist Gaëlle Bien-Aimé said in one of several tweets over the weekend.

While the concept of a free Haiti is not new, the latest rebirth, in the form of a hashtag, was brought to life by Augustin. A student at the private University of Notre Dame d’Haiti in Port-au-Prince, he was at work at St. Francis de Sales Hospital near downtown Port-au-Prince Friday when the specialized unit of the Haiti National Police was ambushed during the operation. The intense exchange of gunfire between the police and presumed gang members could be heard for miles and went on for hours, he said.

Some of the patients he and others ended up caring for that day were victims of the clash, which also left eight police officers wounded.

“Whenever you step out, you feel like you are more likely to die than return home,” Augustin said. “It’s no way for anyone to live.”

Augustin, who said he doesn’t belong to any political party or group, said he wanted to open people’s eyes.

“Even though these problems were unfolding they stayed among us because we were presenting them in Kreyòl,” he said. “I thought we needed something that would permit people living outside of the country to understand what we are living.”

Friday’s violence was just too much, said Augustin, who days earlier had joined thousands of medical workers, political activists and members of civil society in a demonstration against kidnappings and insecurity after the killing of his professor, Dr. Ernst Pady, a local pediatrician.

Pady was killed on February 28 in front of his clinic during an attempted kidnapping. The killing was caught on video that was widely shared on social media networks.

This is not the first time Haitians have turned to social media to express their anger and find support. In 2018, another group of activists launched the #petrocaribechallenge hashtag following reports on the misuse of nearly $2 billion in aid from Venezuela after Haiti’s devastating 2010 earthquake. Haitians, along with celebrities all asked: Where is the PetroCaribe money/Kot Kob PetroCaribe?

Now there is also anger over rising levels of violence, including kidnappings and violent attacks by heavily armed gang members.

Augustin said some days the violence is so intense in Port-au-Prince, where black smoke from burning tires darkened the skies Monday, that he can’t even get to the hospital because streets are blocked and kidnappings are rampant. There have been sit-ins, and protests like one on Monday where rogue police officers who call themselves Fantom 509 demonstrated and demanded that the government recover the bodies of their comrades — but nothing has changed. The group, which was cheered by some in the population, were later tear-gassed by officers on the Champ de Mars when they attempted to deliver a message.

Soon Haitians on Twitter began picking up the #FreeHaiti hashtag to highlight a long list of concerns, including the cop killings, a recent prison break in which more than 400 people escaped, the surge in gang-driven kidnappings and deep humanitarian needs.

“The way it started, it was literally a cry for help,” said Wanda Tima, founder of a popular social media platform, the Haitian-American Facebook page and @lunionsuite on Instagram. “At the beginning, it wasn’t even like a movement yet where they were asking people to tweet it. It was simply, ‘We’re tired; we need more attention paid to this; we’re tired of the violence.’ ”

By Saturday afternoon, the #FreeHaiti hashtag had been tweeted more than 300,000 times, said Tima, who was monitoring it. By 3:30 a.m. it hit a half million tweets.

“When #FreeHaiti started trending, I was shocked,” she said, adding that it began to go viral after two graphics were created and shared.

The posts from Haiti using the hashtag have included firsthand accounts from people about the lack of healthcare and poor roads, as well as explainers on “Free Haiti from whom and from what?”

Douyon and other anti-corruption activists who have been demanding accountability in the misuse of Venezuela funds said they deserve a different Haiti, one where, for example, a criminal trial on the alleged embezzled funds in the PetroCaribe process can happen and those found guilty brought to justice.

“So that there could never be that kind of waste again with the country’s money. #FreeHaiti,” Nou Pap Dòmi tweeted.

“One thing that we need to take into consideration is that it’s been a long time since Haitians from in-country as well as abroad came together to call out the way we are being treated and the issues that are currently taking place in the country. This movement, reflects our will for change, as well as our pain as a nation,” he said.

The #FreeHaiti hashtag, Francois said, is not that much different from the #petrocaribechallenge except that compared to 2018 when that movement was first launched, the situation in Haiti today is worse.

“I personally went to the first PetroCaribe sit-in because I believed that as a young person living in this country, it was my duty to ask for the money that was supposed to help us see a brighter future,” he said from Port-au-Prince. “The #FreeHaiti challenge, is a continuation of this call, with more youth, and more help, as well, from inside and outside the country. It won’t die because it’s us as youth that started it, it’s us as people who do not want to fly away from Haiti that started it. This is our country, this is our fight.”