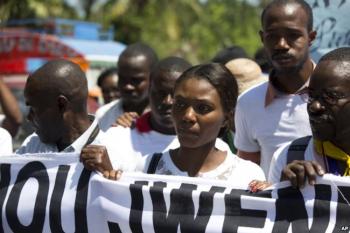 Fleurette Guerrier, the wife of missing photojournalist Vladjimir Legagneur, joins hundreds of journalists in a march to demand an investigation into why the freelance photographer vanished while on assignment, in Port-au-Prince, Haiti, March 28, 2018.

Haiti's National Police spokesperson told VOA Creole Friday that they have two suspects in custody who say they were involved in the murder of journalist Vladjimir Legagneur, who disappeared on March 14.

Legagneur left home on a reporting trip in Grand Ravine that day — a poor Port-au-Prince neighborhood known for its violence and gang activity. He was never heard from again.

Frantz Lerebours told VOA Creole police went to the area where the journalist was last seen to verify information it had received on his disappearance. Lerebours said skeletal remains and a hat were found, collected and brought back to Port-au-Prince to be examined by a forensics team.

"They were pretty fresh," he said, referring to the evidence collected. He said police would try to identify the remains to determine whether or not they belong to journalist Legagneur.

The police spokesman said Legagneur's wife, Fleurette Guerrier Legagneur, confirmed the hat was the one her husband was wearing on the day of his disappearance. Lerebours also said police will be ready to make more arrests as soon as they have the results of the forensics and DNA tests.

Fleurette Guerrier, the wife of missing photojournalist Vladjimir Legagneur, joins hundreds of journalists in a march to demand an investigation into why the freelance photographer vanished while on assignment, in Port-au-Prince, Haiti, March 28, 2018.

According to Fleurette Guerrier Legagneur, Vladjimir Legagneur had received a phone call the day before that resulted in an assignment on which he set out the following morning.

"I was really worried," she told Le Nouvelliste newspaper a few days after his disappearance, recalling her conversation with her husband about the assignment the morning of his disappearance.

"But I know this is his profession," she added. "I can't keep him from doing his job. So, I talked to him about it, and he was determined to go out and report the story. And before leaving home that morning, he gave me a phone number that he said I could call in case his personal phone did not respond."

When Vladjimir Legagneur failed to return home that night, Fleurette Guerrier Legagneur reached out to his journalist colleagues.

"I've heard a lot of rumors about that day," she said. "Some people say the neighborhood was very active. There was a fight between two gangs. Then, others tell me there was nothing. Other people tell me a person died in the neighborhood, but it was a gang member. You know, everyone has information to give that you can't even verify. I have no way of knowing whether it's true or a lie."

The Ministry of Communication has expressed solidarity with the journalist's family and hopes to find out what happened to Vladjimir Legagneur.

On March 28, hundreds of journalists participated in a protest in Port-au-Prince to ask police to do more to find their missing colleague.

Meanwhile, the Haitian Journalist Association (AJH), the Association of Haitian Media (ANMH), and other members of the local media have also publicly expressed concern about the disappearance. The Caribbean and Latin American branch of the International Federation of Journalists (IFJ) posted a message on its website expressing concern, as well.