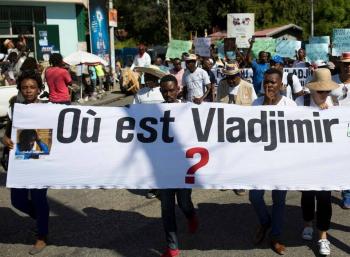 Reporters hold a banner with a question that asks in French: “Where is Vladjimir?” as hundreds of journalists marched to demand an investigation into why the 30-year-old photojournalist Vladjimir Legagneur vanished while on assignment, in Port-au-Prince, Haiti, on Wednesday, March 28, 2018. Legagneur disappeared on March 14 after entering the community of Grand Ravine, considered one of the poorest and most dangerous in Port-au-Prince. Dieu Nalio Chery AP

Haiti police are investigating whether part of a body found in an area where a freelance Haitian photojournalist disappeared March 14 are those of Vladjimir Legagneur, 30.

Police spokesman Frantz Lerebours said the mangled partial remains were discovered Wednesday, along with a hat, after Police Chief Michel-Ange Gédéon ordered police to run an operation into Grand Ravine, the gang-controlled neighborhood in Port-au-Prince where Legagneur was last seen as he worked on an independent project.

“It’s the DNA [test] that will say for sure if it is him,” said Lerebours, adding that a motorcycle taxi driver who drove the victim was also killed.

On the morning of March 14, Legagneur told his wife, Fleurette Guerrier, that he was headed to the teeming slum to meet someone as part of an independent photo assignment. A freelancer who worked for several Haitian media outlets, Legagneur “really loved taking photos and he was passionate about it,” Guerrier, 31, said.

“It wasn’t about the money,” she said. “He always seized every opportunity he could to take a photo.”

A police source said they know Legagneur stopped in at a nearby police station before entering Grand Ravine, where gang members keep a close eye on people coming into and leaving the area.

In November, Grand Ravine was the scene of a deadly police raid in which two police officers and several civilians died. The deaths have raised questions about what happened during the anti-gang operation. Gang members have remained suspicious of outsiders, and police have been reluctant to go in. Even United Nations peacekeepers, before their withdrawal from Haiti in October, often steered clear of the community.

An internal police investigation was ordered into the raid, and the Port-au-Prince police director, Alain Auguste, who ordered the operation, was replaced. The United Nations Mission for Justice Support in Haiti, which supported the raid and condemned the violence afterward, has called for a judicial inquiry into the police shootings and alleged human rights violations.

On Wednesday, hundreds of journalists wearing white and holding placards took to the streets of Port-au-Prince to denounce the passivity of Haitian authorities after Legagneur’s disappearance.

Guerrier, who filed an official complaint with the chief prosecutor’s office after the march, said she filed a missing person’s report with Haiti’s investigative police unit on March 16 after spending two days searching “local hospitals, police stations and the morgue” for her husband. She said she did not hear back from police, who in a press conference on Wednesday guaranteed reporters “that we will shed light on this case.”

“There are no no-go zones,” Gédéon, the police chief, declared in a tweet. “In the days coming, Grand Ravine will be emptied of its bandits and accessible to all.”

The lack of an outcry by Haitian authorities over Legagneur’s disappearance and silence of police investigators and the chief prosecutor’s office led Haiti-based journalists to ask for help on Guerrier’s behalf from press freedom organizations such as Reporters Without Borders and the Committee to Protect Journalists. The journalists also took to Facebook and Twitter with the French hashtag #OuEstVladjimir, or WhereIsVladjimir.

A number of foreign journalists on Wednesday, from France to Latin America, also showed solidarity with their Haitian colleagues by posting photos on Twitter of themselves holding up a photo of Legagneur with the French hashtag. That same day, the Committee to Project Journalists issued a statement urging Haitian authorities to “do everything possible to locate...Legagneur and conduct a full and transparent investigation into his disappearance.”

“These incidents are like a scar that never goes away,” Pierre-Paul said.