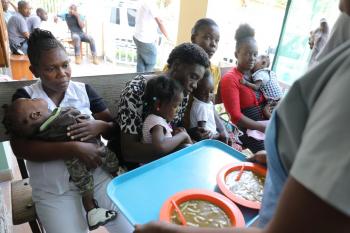 Farmhand Celavi Belor has lost so much weight over the past year his clothes hang limply off his angular frame.

“Sometimes I go two or three days without eating,” the 41-year-old said as he looked up from hoeing a rocky field in the mountains of northwestern Haiti.

The only food Belor, his wife and five children had to eat the day before was cornmeal, and now the only food left in their mud shack is a shriveled green chili and some stale beans.

“My biggest worry is one day I just won’t be able to get up anymore,” he said, his eyes sunken and unfocused.

While Haiti, the poorest country in the Americas, has long had one of the world’s highest levels of food insecurity, drought has ravaged harvests for the last few years, worsening food shortages and raising prices.

The northwest, one of the Caribbean nation’s most remote and impoverished regions, has suffered the most.

A collapse in the gourde currency has put imported food - which supplies more than half the country’s needs - out of reach for many Haitians like Belor, who earns just $0.40 a day when he can find the work.

Compounding that, anti-government protests sparked by anger over alleged corruption shuttered businesses and public institutions for three months last fall and disrupted the transportation of goods, including food aid.

By further stoking inflation and squeezing incomes, the peyi lock, as the standstill was known in Creole, has tipped Haiti into a new hunger crisis.

One in three Haitians - around 3.7 million people - needs urgent food assistance, up from 2.6 million people at the end of 2018, the United Nations said in December. Haiti now ranks 111 out of 117 countries on the Global Hunger Index, in the company mostly of the poorest sub-Saharan African countries.

If immediate action isn’t taken, by next month 1.2 million people will only be able to eat one meal every other day in the Caribbean nation, the United Nations has warned.

“No one has eaten yet today but if I feed my kids too early in the day they are hungry by night and cannot sleep,” said Frena Remorin, 30, who lives down the road from Belor in the district of Dessources.

Sitting on a stool peeling manioc and bananas to boil over a charcoal fire, Remorin is struggling to find work washing clothes because few people have the money to spend.

“I don’t have enough money now for two meals a day,” she said.

Donors who had hoped Haiti could rebuild as a successful nation after the country’s devastating 2010 quake have been frustrated by the political instability and bad governance hampering development efforts.

With no authorized government or budget, Haiti now is not allowed to access certain funds from international organizations earmarked for it, further hindering its ability to respond to the food crisis. Foreign aid to Haiti’s public coffers, which leapt after 2010, halved last year.

President Jovenel Moise is struggling to negotiate a power-sharing agreement to break the political gridlock. In the meantime, local authorities make do.

“This is the first time we’ve had it this bad,” said Dessources district leader Jean Jacques Lebeau, 60, who receives $45 per month from the central government to help around 12,000 households.

It wasn’t always like this. Haiti was largely food self-sufficient until the 1980s, when at the encouragement of the United States the country started loosening restrictions on crop imports and lowered tariffs, then imported surplus U.S. crops, a decision that put Haitian farmers out of business and contributed to investment tailing off.

Add to this the effects of climate change: Haiti regularly tops the ranks of most vulnerable nations. This is because it is part of an island in the Caribbean, where hurricanes are getting stronger, but also because it has little infrastructure or resilience.

The real impact of the crisis will show in six months or so as malnutrition sets in, experts like Cedric Piriou, Haiti Country Director of Action Against Hunger, say.

“If we had four children suffering malnutrition die before, now these last few months it has been six to eight,” said Margareth Narcisse, 57, a doctor on the medical board of St Damien Pediatric’s Hospital in Port-au-Prince, the capital city.

The impoverished slums of the capital are, together with the Northwest, the areas worst affected by hunger.

In the malnutrition ward, 3-year-old Dorvil Chiloveson lies on his side in a cot. He is suffering from severe protein malnutrition, known as kwashiorkor: his tiny body is swollen with edema, with patches of skin discolored and showing raw flesh.

“We couldn’t go sell our harvest during peyi lock so we lost it,” said his grandmother Marise Rose Dor, 41, who lives on the outskirts of Port-au-Prince.

After they ate their crop, all they could afford was rice with bananas from the garden. Instead of buying drinking water, they used a local spring they know is likely to be contaminated due to the absence of a sewage system in Haiti.

Many families told Reuters they could no longer afford tablets to clean the water or charcoal to boil it.

The U.N. World Food Program (WFP), which alongside other international organizations assists Haiti’s most needy, has scaled up operations in response to the crisis, sending food by ship or traveling by helicopter to hand out cash, given the resurgence of gang violence plaguing the roads.

The WFP estimated in November it needed $72 million to fund this emergency assistance to 700,000 Haitians for eight months, but has raised only $15 million so far.

“Why should we bail the authorities out if they helped create this crisis?” one Haiti-based European diplomat asked, adding that politicians were not being held accountable. “How do we change that so that they don’t hurt people when they are going hungry?”

Humanitarian workers - and Haitians - beg the world not to turn a blind eye to the immediate suffering.

In Dessources, Belor, who cannot afford schooling in a country where around 80 percent of education is private, says his children are pale and listless.

In the past, at least they could rely on the mango and breadfruit trees if they could not afford to buy food. But due to the drought, these trees are no longer producing.

Belor no longer even worships at his Baptist church because he cannot afford the clothes he feels he needs to attend.

“I live without hope,” he said.