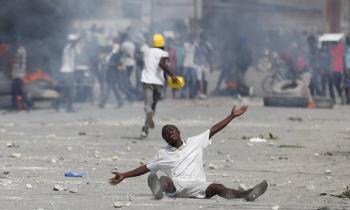 A protester drops to the ground after police fire teargas to prevent demonstrators from marching in Port-au-Prince, Haiti, on 4 October. Photograph: Rebecca Blackwell/AP

Haitian protesters have clashed with police in the country’s capital, Port-au-Prince, hours after a journalist who had covered previous anti-government protests was found shot to death in his car.

The killing of Néhémie Joseph, a reporter with Radio Méga, has thrown fresh fuel on the mounting crisis in Haiti that has seen political turmoil in the impoverished Caribbean island.

Fresh demonstrations broke out on Friday as protesters who have been demanding the resignation of the president, Jovenel Moïse, burned tyres and spilled oil on streets in parts of Haiti’s capital.

The most recent killing comes amid a spike in violence in Haiti that has claimed 20 deaths and paralysed the country for weeks, closing businesses and schools and creating widespread shortages.

Violence in the country has been increasing after months of protests that intensified with a highly critical report in May on the so-called Petrocaribe affair which involved the disappearance of about $2.3bn in an arrangement to buy cheap Venezuelan oil.

The deferred payment scheme, in which Moïse has been implicated, was supposed to free up money for an ambitious programme to improve services in the country – most of which were never delivered.

No one has been arrested so far in the death of reporter, who had been covering the protests and was found dead in his car late Thursday in the town of Mirebalais, north-east of Port-au-Prince, according to Radio Vision 2000.

In a Facebook post in late September, Joseph said that a couple of politicians had threatened him after one of his shows and accused him of inciting protests. It was unclear, however, if this was the motive for his killing.

He is the third Haitian journalist killed in less than two years. The Radio Sans Fin reporter Pétion Rospide was fatally shot in June as he drove home, while the freelance journalist Vladjimir Legagneur disappeared in March 2018 while working on a story.

The Association of Professional Journalists of Artibonite asked justice officials to investigate the killing.

“The press should not have to claim victims and bodies as their own,” the group said.

Last month a photojournalist was shot in the face by a Haitian senator who opened fire outside the country’s parliament. Chery Dieu-Nalio, an Associated Press photographer, was wounded in the face and a second man was also injured.

“It’s a very, very serious situation,” said Michèle Pierre-Louis, a former prime minister with the non-governmental organisation Fokal. “No one is really talking about the suffering of the people. The consequences are terrible.”

Earlier this week, Moïse announced the creation of a commission charged with finding a solution to end the worsening crisis, but opposition leaders have rejected his call for dialogue and unity. The opposition says it wants Moïse to step down as anger over corruption, rising inflation and lack of basic goods including fuel continue to roil Haiti.