Haiti Ranked 173 out of 180 in Environment Management 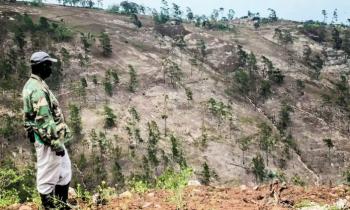 Most of Haiti’s mountains are deforested, one sign of its environmental crisis.

After receiving a score of 26.1 out of 100, Haiti finished in 173rd place in the 2022 Environmental Performance Index (EPI) standings of 180 countries.

“The 2022 ranking tells us what we already know: our environmental situation is critical, catastrophic,” Edgar Previlon, the executive director of Network for Youth Education, Environment and Health (REJES), told The Haitian Times.

“Unfortunately, no sustainable or structural actions can be considered in this context of weak, illegitimate central governance, marked by this revolting insecurity and the accelerated  deterioration of living conditions,” he added.

Meanwhile Haiti’s neighbor, the Dominican Republic, holds the 89th spot in the EPI ranking. Denmark topped the list with a score of 77.9 while India finished last, accumulating 18.9 points.

Researchers from Yale and Columbia University started the EPI ranking in January 2006. It ranks countries based on climate change performance, environmental health, and ecosystem vitality.

EPI’s latest ranking came out at a time when the Haitian government has chosen June to be environment month to raise awareness among citizens about environmental protection. The ranking was also released days after Haiti’s Civil Protection disaster response agency announced that 19 tropical storms, including four hurricanes, might hit Haiti this hurricane season.

Haiti is the fifth most exposed country to natural disasters in the world, according to the United Nations Office for Disaster Risk Reduction (UNDRR). Residents have not been well-prepared for hurricanes in years past and ended up sustaining much loss of life, limb or property from storms that caused significantly less devastation in neighboring countries.

In August 2020, Storm Laura passed through Haiti, killing at least 20 people and damaging or destroying about 465 homes from flooding.

“It’s time to recognize the need for an environmental emergency,” Previlon said. “The state and civil organizations should work on implementing a solid plan to find the appropriate resources to manage Haiti’s environment well.”