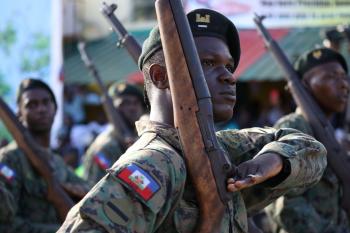 Haiti hasn't had a military since 1995, when it was disbanded after a series of coups, brutal crackdowns, and an American intervention. But now, officials there say it's time for a comeback.

Last year, President Jovenel Moïse declared that the Caribbean's poorest nation would be reconstituting its army, just in time for the drawdown of United Nations troops, who have been part of the Haitian security landscape for years.

For the past two decades, responsibility for law and order has largely fallen to the country's National Police, a force that is heavily funded, and heavily vetted, by the U.S.

According to official polls, the renewed army has the support of the majority of the population, where the U.N. is widely seen more as a force of instability and foreign control, rather than peace.

But on a recent visit to the country, VICE News learned that many Haitians remain deeply skeptical of the plan.

Mario Joseph, a leading human rights lawyer in the capital, Port-au-Prince, says the military brings back dreadful memories. And the decision by authorities to reappoint many of the original officers to the new High Command has only reinforced his concerns.

The question facing Haitian officials is whether they can really make peace with the troubles of the past, or if they are simply hoping to turn the page.

"I can understand, you know, for some people there's some concern," said Herve Denis, the Haitian minister of defense. "But I said, 'Watch us. You will see that we are doing the best for the country.'"

But in a country already strapped for cash, and barely recovered from a 2010 earthquake that left thousands of people dead and much of Port-au-Prince in ruin, it's hard to know where the money for an army would come from.