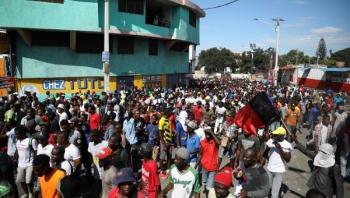 Wednesday marks the third consecutive day of a national strike in Haiti and fourth day of anti-corruption protests, which began Sunday. Demonstrators are demanding accountability on the mismanagement of PetroCaribe funds.

According to organizers at least 11 people have been killed as armed civilians confronted state forces and anyone who wanted to cross the barricades set up across the capital city of Port-au-Prince.

Around 75 people have been arrested.

General strikes have paralyzed the Haitian capital of Port-au-Prince for days. Thousands have marched in various parts of the country demanding better living conditions, access to health, education, accountability from authorities, and an end to government corruption.

Members of the political opposition are demanding the resignation of President Jovenel Moise for failing to investigate corruption allegations against previous governments related to the management of PetroCaribe, a regional integration initiative created 13 years ago by former Venezuelan President Hugo Chavez. The energy cooperation agreement between Venezuela and other Caribbean countries is a political initiative to facilitate Caribbean access to hydrocarbons skipping intermediation, market prices, and speculation.

Opposition leader, Andre Michel, said Tuesday that "Jovenel Moise has to leave power" because he has lost "control of the country."

"We can not allow more deaths, more instability, the PetroCaribe trial is not possible with Jovenel Moise as president, he is an obstacle to the process, the president has to accept that the people do not want him to remain in power," Michel added.

President Moise met Monday with two other heads of State, saying in a Tweet that the meeting was "held as part of the ongoing dialogue, (and) was an opportunity to assess the current socio-political situation in order to provide concerted responses."

"I met with the other two powers of the state. This meeting, held as part of the ongoing dialogue, was an opportunity for us to assess the current socio-political situation with a view to providing concerted responses," the president tweeted.

In recent months, Haiti, where more than half of the 10 million inhabitants survive on less than US$2 per day, has been the scene of demonstrations. Protests began in July after an increase in fuel prices.

Since last August there have been more protests to demand that the government look into the allegedly fraudulent handling of PetroCaribe funds and prosecute those who are responsible.

The PetroCaribe corruption scandal has added to Haiti’s economic crisis and to government distrust.

Moise’s government has repeatedly expressed a commitment to investigate the alleged irregularities in the management of PetroCaribe funds.