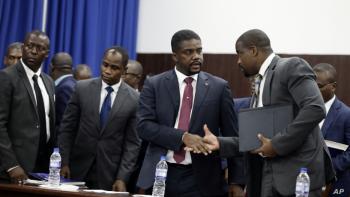 Haitian Senator Willot Joseph, a member of the ruling PHTK party (Pati Ayisyen Tet Kale), admitted Friday that he accepted a $100,000 bribe from Prime Minister-Designate Fritz William Michel in exchange for a yes vote on his nomination.

The stunning admission was made during an interview with Haitian news site Gazette Haiti.

"I don't have any problem with [accepting] money that comes my way without having to sign for it, or any kind of paper trail. I take it and I don't have to be hypocrite [about it] with anyone," Joseph said.

The senator criticized his colleagues who denied taking bribes after a public accusation made by Senator Saurel Jacinthe on Wednesday, as the Senate was preparing to vote on the prime minister's nomination. The vote was postponed without setting a new date.

"They are slick, I don't see anything wrong with receiving money during difficult times," Joseph said.

Opposition Senator Saurel Jacinthe told reporters Wednesday, ahead of the Senate vote, that Senate President Carl Murat Cantave personally came to his home to offer him $100,000 in exchange for a yes vote. He also named several other colleagues whom he alleges were offered bribes and accepted.

"Mr. Cantave, the president of the Senate, came to my home and offered me money," he told reporters, flanked by opposition colleagues.

Cantave denied the allegation on Twitter, saying, "For the sake of history and the truth, I never offered money to Senator #Saurel Jacinthe who is delusional. I am a proud and arrogant man. If the senator has proof [photos or sound], may he show them. The nation can not take this drama. "

In an interview with VOA Creole Thursday, Senator Cantave said he did not want to discuss the allegation.

Senator Augustin was also pressed about the bribery allegations in an interview Friday morning with local radio station Vision 2000. He responded that even if he was aware of bribes, he would not publicly acknowledge it. Asked if he personally has ever accepted money in exchange for a vote, he claimed there wasn't a single lawmaker who had rejected such an offer.

Senator Dieudonne Luma Etienne told VOA Creole she was stunned to be named in the bribery allegation.

"During the GPRD [Groupe des Parlementaires Pour Le Renforcement de la Democratie] political bloc meeting of which I am a member — there were four of us present — and we were debating our position on the nominee. Money was never part of the discussion. I never saw, nor heard money discussed," she said. "I am the daughter of farmers. I've made many sacrifices. I have never chosen to make money the easy way. I've worked hard and struggled to make a name for myself in society. So there's no way today I'd be willing to tarnish my reputation for something like this."

In an interview with VOA Creole, pro-government Senator Ronald Lareche called for an investigation.

"The senator [Jacinthe] has made this allegation more than once and said he has convincing proof. When we're talking about a $100,000 American dollar bribe and [consider] the people offered money — it comes to about $2 million dollars [in Haitian money].  Where did this money come from? So I think there has to be an investigation," Lareche said. "I don't have any proof as to whether it is true or not but my colleague claims to have video, so we're waiting to see."

Neither the Prime Minister-Designate, Fritz William Michel, nor President Jovenel Moise have commented on the bribery allegation.