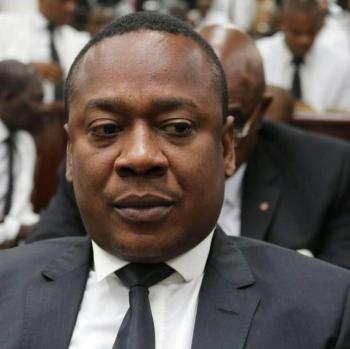 Haiti Senator Garcia Delva, who also is known as Gracia Delva of the band Mass Konpa, has been implicated in kidnapping involving a notorious gang leader.

A Haiti senator who recently questioned his own qualifications to hold public office is being tied to one of several kidnappings carried out by a notorious Haitian gang leader.

Haiti National Police sources say an investigation into several kidnappings by infamous gang leader Arnel Joseph, who was arrested last week, reveals that during one of the kidnappings the gang leader was in contact with Haitian senator Garcia Delva.

The victim was a neighbor of Delva’s who had been kidnapped along with two of his employees in March as they drove from Léogâne to Port-au-Prince. During negotiations to secure the group’s release, the businessman’s wife reached out to Delva for help.

Unbeknownst to the victim’s wife, police say, Delva had already spoken with the gang leader, first on his cellphone and then seconds later on the kidnap victim’s telephone. The kidnapped group was eventually released after a ransom of $110,500 was paid.

“It doesn’t surprise me,” Pierre Esperance, a human rights advocate who is familiar with the police investigation, said of Delva. “He is a deportee of the United States who is implicated in wrongdoing and he’s repeating what he used to do before. He has dirtied the image of the Senate like other senators.”

Delva, 45, did not return calls from the Miami Herald seeking comment. Founder and lead singer of the Haitian konpa band Mass Konpa, Delva earlier this year expressed his desire to run for president of Haiti and recently said during a live radio broadcast that there are many more Haitian citizens “who are are much more qualified than myself to be senator.”

Telling Haitians they should have the courage to run for office, he said: “I don’t want you to have another senator like me.”

This is not the first time that Joseph has been tied to Delva, who was charged with battery in 2000 in Miami-Dade County.

In April, the head of the Senate’s justice commission, Sen. Jean-Renel Senatus, told reporters that “there were a total of 24 phone conversations, some of which lasted 15 minutes, 92 seconds, others which lasted a minute” between Delva and Joseph. Senatus, a former government prosecutor, said the calls were made between Feb. 7 and Feb. 22. During that period, Joseph was being sought by Haitian police and even appeared, alongside members of his gang, at an anti-government protest near the presidential palace openly brandishing his gun.

“The Senate has only one thing to do in this case and it is to remove Sen. Delva’s immunity,” said Esperance, who visited Joseph on Tuesday.

The allegation involving Delva raises questions about the credibility of the Haitian Parliament, which has been derided as “legal bandits,” given the number of lawmakers with criminal histories. It also underscores concerns about the collusion between those in power in Haiti and gangs. In a detailed U.N. report on a gang-led massacre in the La Saline slum in November, human-rights investigators raised a number of concerns about the abuses committed against residents and the alleged involvement of government officials.

At the time of his arrest, Joseph was preparing to head into surgery for a wounded leg when specialized Haiti National Police units swooped into Bonne Fin hospital in Les Cayes and arrested him. Laying on the ground naked as reporters took photos and videotaped him, Joseph said in Creole that his leg had been wounded during a shootout with a rival gang, Ti Sourit.

Considered Haiti’s most wanted fugitive, Joseph had spent more than a year eluding police as his gang terrorized residents in Port-au-Prince’s Village de Dieu slum and in the Artibonite Valley, where earlier this year the gang attacked a police station.

On Wednesday, Joseph was released from a local hospital, after finally having surgery on his leg, and into the custody of the judicial police. That same day, Police Chief Michel-Ange Gédéon, who has been lauded for Joseph’s arrest, announced the arrest of nine other members of Joseph’s gangs. Gédéon and his top brass also appeared before the Senate in a closed-door hearing to discuss the current state of security and Joseph, who police said raised tens of thousands of dollars through ransom-kidnappings and other criminal activities.

During the hearing, police were also questioned about the allegations concerning Delva. Delva was present during the questioning.

“The police said they were 98 percent certain Sen. Delva is involved in kidnapping with Arnel Joseph,” said Sen. Patrice Dumont, who was present during the questioning.

Dumont said that based on police revelations, he wrote to the Senate bureau asking that Delva, who serves as vice treasurer, not continue to assume the role. Dumont said the Senate’s internal rules do not permit him or any other senator to ask Delva to resign or for them to remove his immunity, which all Haitian lawmakers have. The Senate, he said, can vote to authorize Delva to present himself before the courts, should a Haitian judge ask him to. something Dumont said he’s prepared to do if a judge were to ask.

“There is just too much evidence,” Dumont said.