Haiti unrest: Gang boss calls on the US to help overthrow gov't 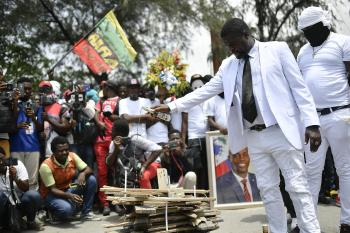 The leader of a coalition of Haitian gangs is asking the US to help him overthrow the government of Prime Minister Ariel Henry. The head of the G9 gang Jimmy “Barbecue” Cherizier said he wanted Haiti's elite gone. He had previously said he would ensure the safe passage of fuel trucks gangs had blocked if Henry was removed. Gangs in Haiti have become more politically assertive since the assassination of President Jovenel Moise in July which has plunged the country into further lawlessness. Al Jazeera’s John Hendren reports from Port-au-Prince, Haiti.