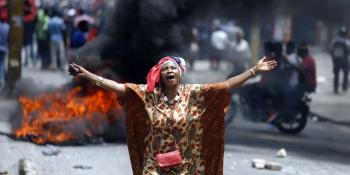 Tens of thousands marching in the streets nationwide to denounce government corruption, reports of police and gang violence and murder and a downwardly spiraling economy. Calls for the government to step down.

If this were Venezuela, as recent FAIR analyses pointed out, elite media journalists and commentators would be all over the story. After all, they’ve been endorsing Washington’s blatant and repeated imperialist designs and interventions in that country for over a decade.

But this is not Venezuela. It’s Haiti.

Not that Washington has always opposed regime change in the world’s first black republic. A decade ago, presidents Bush père et fils approved and backed coup d’états twice, in 1991 and 2004, against Haitian President Jean-Bertrand Aristide, a left-wing populist chosen in the country’s first free elections. As with Iran and Venezuela, those were what The Intercept’s Jeremy Scahill (2/20/19) called “Regime Change We Can Believe In.”

But unlike Aristide, and unlike Venezuela’s President Nicolás Maduro, President Jovenel Moïse is Washington’s “man in Port-au-Prince.” He was hand-picked by Michael “Sweet Micky” Martelly, the previous Washington-approved president, and had pledged to follow his “Haiti Is Open for Business” neoliberal policies.

Is that why corporate media are not calling for the replacement of the Haitian government? In any case, they’re doing very little to inform US audiences of the increasingly dire crisis in that country, caused in no small part by the two Aristide-overthrows and a series of harmful US-imposed “free trade” policies starting back in the 1980s.

No matter that tens of thousands are in the streets. Moïse stays.

Even though the 2016 Haitian elections were largely discredited, and only 21 percent of the population even bothered to vote—“the lowest participation rate for a national election in the Western Hemisphere since 1945,” according to a report from the Institute for Justice and Democracy in Haiti—the US government has consistently backed Moïse.

Even though the US State Department warns travelers of “crime, civil unrest and kidnapping”; even though Moïse has been accused by his own government auditors of benefiting from an “embezzlement scheme” in connection with the Venezuelan Petrocaribe program, which financed billions of dollars worth of post-earthquake projects; even though the economy continues to deteriorate, with many public institutions closed for over a week and state employees going unpaid for over a month; even though the UN says the country is experiencing a “humanitarian crisis”; even though violence and lawlessness are on the rise (a recent UN report implies police were present at the “La Saline massacre,” which involved the murder and dismemberment of at least 26 people and two gang rapes in one of the capital’s poor neighborhoods), and even though the massive protests against the Petrocaribe corruption scandal are more than mere demonstrations—they are an “uprising.”

To give them credit, a few corporate media outlets—like the Miami Herald (6/4/19) and NPR (6/11/19)—have done some good stories on the protests and the scandal, as well as on the La Saline massacre.

But most news outlets don’t even run AP stories, and aside from some opinion pieces, reporting has not dug too deep.

Worse, the Miami Herald’s June 19 story on a “fact-finding” delegation from the Organization of American States (OAS) did far more damage than just sticking to the shallows. Reporter Jacqueline Charles acted as an information conveyor belt for empire when she cited an unnamed OAS “official” who was doing more than “find facts.”

The article—headlined “OAS Tells Haiti Opposition to Back Off”—quoted the anonymous official seven times, giving the opposition and protest movement its marching orders. “If you don’t like Moïse, the solution is to beat him at the ballot box,” Charles quoted the official. “We are not going to ask him to resign.”

That’s funny; not long ago, the OAS did ask a president to resign.

On January 19, the body voted to “not recognize” Maduro as president of Venezuela, saying that his election had been faulty, and that it was concerned

about the worsening political, economic, social and humanitarian crisis in Venezuela resulting from the breakdown of democratic order and serious human rights violations.

That laundry list could if anything be applied more easily to Haiti. But the message the OAS sent to Haiti through the Miami Herald was the opposite.

But was that really a message from the OAS? Or was it from the hemisphere’s hegemon?

At least one of the organization’s ambassadors, Sir Ronald Sanders of Antigua, penned a statement over the weekend to denounce the delegation, saying it was not official and lacked a formal mandate from the body. He noted that it represented an increasing “pattern of ignoring established procedures and authority.”

Unsurprisingly, the visitors—who met with the president behind closed doors, and then left without giving any official statement—were led by US Ambassador Carlos Trujillo. Score one for empire?

By the time the letter from the Antiguan ambassador hit a few Haitian media outlets, the Miami Herald’s “scoop”—or more accurately water-carrying—had been translated and circulated throughout the country.

Haitian and foreign readers and viewers would be so much better served if corporate media could follow the advice of its own codes of ethics, like the one from the Society for Professional Journalists which says, “seek the truth and report it,” “do no harm”—and “consider sources’ motives before promising anonymity.”

Messages to the Miami Herald can be sent here (or via Twitter @MiamiHerald). Please remember that respectful communication is the most effective.