Haitian activist to speak in U.S. demanding housing rights for the country’s 400,000 displaced 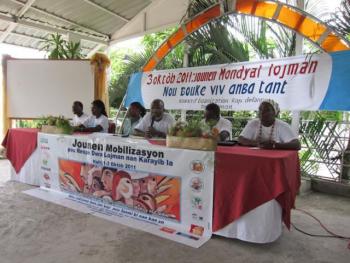 Press release, September 11, 2012
Housing activist Reyneld Sanon is beginning a speaking tour to key cities in the United States. He is a founding member of FRAKKA (Force for Reflection and Action on Housing). The tour will raise awareness about Under Tents, the international campaign for housing rights in Haiti. The campaign is a joint initiative of Haitian grassroots groups and more than 30 international organizations that are demanding a solution for Haiti’s homeless.
Sanon will visit New Orleans (Sept 14 -15), Houston (Sept 16 -17), Washington D.C. (Sept 18-20), New York City (Sept 21-24) and Miami (Sept 25-26).
The January 2010 earthquake killed an estimated 300,000 people and left 1.5 million homeless. In its wake, survivors spontaneously created more than a thousand temporary encampments throughout Port-au-Prince. There has been no long-term planning for a solution to the country’s housing crisis, and the Government of Haiti has no comprehensive plan to relocate the majority of people into safe, permanent homes. Indeed, fewer than 6,000 houses have been constructed since the earthquake. Nearly 400,000 Haitians are still living in displacement camps, where they face high rates of gender-based and other violence, forced evictions, lack of clean water and toilets, and cholera.
“People simply want a space where they can live like human beings,” says Sanon.
Last month, tropical storm Isaac hit Haiti, underscoring the crisis affecting those still living in temporary shelters, which are often not much more than a tarp. Thousands of shelters were destroyed in the storm’s 60 mph winds and heavy rain resulted in the flooding of camps. In all, 24 people were killed.
Beverly Bell, coordinator of Other Worlds, said, “It is past time to resolve the crisis of the hundreds of thousands of homeless people who’ve been forgotten. The billion-plus in U.S. government aid to Haiti has not resulted in the completion of one single house in earthquake-impacted area. We in the U.S. need to step up and ask our government to make funds available to resettle those suffering inhumane conditions.”
As part of the Under Tents campaign, Haitians are calling on their government to quickly designate land for housing and to implement a social housing plan. They also call on the Haitian government and international community to allocate funding to realize this plan. The campaign website is www.undertentshaiti.com and a petition is open for signatures at www.change.org/undertents.
For more information about public events organized by Amnesty International USA, the Quixote Center, Haiti Liberte, the New Orleans Worker’s Center for Racial Justice, and others, see www.undertentshaiti.com/schedule or contact Deepa Panchang (deepa.otherworlds@gmail.com).
Reyneld Sanon is a leader within the current social movement in Haiti for the rights of Haiti’s homeless, or IDPs (internally displaced people). He was a founding member of FRAKKA (Force for Reflection and Action on Housing), a coalition of 40 grassroots groups founded in March 2010, two months after the earthquake; and currently serves as the director of FRAKKA's executive committee. Sanon has been a founding member of a range of civil society groups and has three decades of experience as a community animator, coordinator, and consultant for a range of local and international organizations.
Sanon is available for interviews while in the U.S. and will be accompanied by Professor Mark Schuller, a Haiti scholar at Northern Illinois University’s Anthropology department.
Press release online here: http://undertentshaiti.com/activist-tour/.