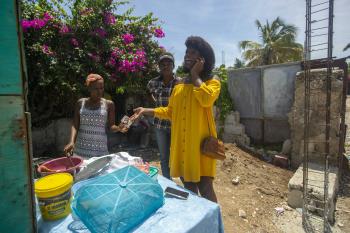 Prejudice and discrimination against transgender people is common in Haiti, but at least one organization is providing a haven where they can feel welcome.

The Kay Trans Haiti center in the capital, Port-au-Prince, provides lodging and care for up to 10 transgender people. Funded by a Spanish healthcare company and the United Nations Development Program, Kay Trans Haiti is open to transgender people who have been victims of verbal or physical abuse. It provides services including a psychologist free of charge, and allows residents to stay for up to a year.

Transgender Laurent Voltus braids the hair of her roommate Vlajimy Cesar as they sit on the porch of the Kay Trans Haiti center where they live, in Port-au-Prince, Haiti, Saturday, Aug. 15, 2020. (AP Photo/Dieu Nalio Chery)

Once people graduate from the center, the program pays their rent for up to a year, after which they must become self-sufficient.

Residents say the neighborhood surrounding the center has gradually become more accepting of them, creating a safe island in a city where they can often feel vulnerable and subject to abuse at any moment.

In 2016, an LGBT cultural festival in Port-au-Prince was canceled after organizers received threats and a local official, calling it a violation of moral values, sought to ban it.

In 2017, Haiti’s Senate passed two bills targeting LGBT Haitians. One would formalize a ban on same-sex marriage, and prohibit public demonstrations in favor of LGBT rights.

Residents of the Kay Trans center can bring their partners there, go out to clubs, and shop without fear of mistreatment from neighborhood shopkeepers, who have become increasing friendly and welcoming.

One of the residents, Semi Kaefra Alisha Fermond, 24, said she had a traumatic childhood because neighbors didn’t want her to play with their children.

“I am proud of myself now because I can wear women’s clothes and go everywhere,” she said. ‘’At my mother’s home I can’t be like that.’’