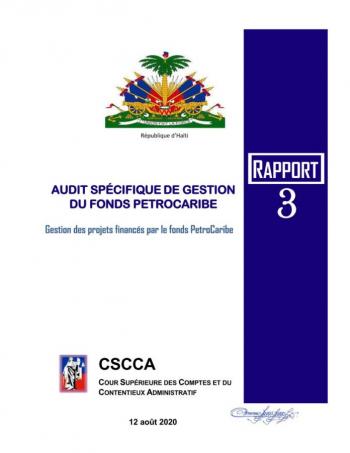 The cover of the latest PetroCaribe report released on Mon., Aug. 17 by Haiti’s Superior Court of Accounts and Administrative Litigation (CSCCA).

On Mon., Aug. 17, 2020, Haiti’s Superior Court of Accounts and Administrative Litigation (CSCCA) released a third huge report on the embezzlement and squandering of $1.74 billion in funds from the PetroCaribe Fund over eight years from September 2008 to September 2016.

In greater detail than its predecessors, the latest report reviews minutely the “irregularities” in the execution of projects carried out by 13 ministries, 15 state agencies, the prime minister’s office, and the state university.

The CSCCA’s recommendations on page 22 are very succinct and understated:

While the exhaustive report is available on the CSCCA’s website (cscca.gouv.ht), it is presented in a practically unreadable format, where one must click a box to view each of the over 1,000 pages. In order to allow our readers to more easily review this important document, we have placed it on the Haïti Liberté website, embedded in this article.

The PetroCaribe Fund was a huge savings account where 40% of the revenues Haiti owes Venezuela for the sale of some $4.3 billion of oil products from 2008 to 2018 was placed. The solidarity fund, which was earmarked for projects benefitting the Haitian people, was repayable at 1% interest after 25 years.

Instead of building roads, canals, schools, hospitals, and clinics, the monies were frittered away through vast corruption and incompetence. This has enraged the Haitian people who continue to demand “Where did the PetroCaribe money go?” and call for trials of those responsible, but until now, not a single official has been charged.

Previous CSCCA reports point to companies that were owned by President Jovenel Moïse as the recipients of millions of dollars of embezzled PetroCaribe funds.