Haitian deportees face an unconscionable crisis during the pandemic 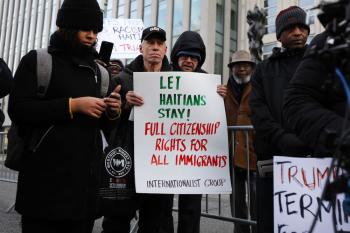 In January 2019, demonstrators hold signs outside a trial aimed at protecting the rights of Haitian immigrants who entered the U.S. under a Temporary Protected Status following the devastating earthquake in Haiti in 2010. Spencer Platt/Getty Images

In light of the attack from the Invisible Enemy, as well as the need to protect the jobs of our GREAT American Citizens,” President Donald Trump tweeted on April 20, “I will be signing an Executive Order to temporarily suspend immigration into the United States.”

The Trump administration has since pursued a plan to prohibit almost all immigration to the United States—moving to suspend green cards, raise the standard of proof for asylum-seekers, and deny migrants the right to testify in court, among other restrictions. Transpiring under the veil of the COVID-19 pandemic, the restrictions appear to enact the life-saving advice of countless doctors and public health experts: To flatten the curve, populations worldwide need to shelter in place.

However, Trump’s interpretation of this guidance reveals a contradictory agenda. The plan is neither to stop all travel nor to protect all lives. “Shelter in place” has become “protect Americans at the expense of others.” In fact, the U.S. has continued to deport thousands of migrants, some of whom were exposed to the virus in detention, to poor countries with extremely weak health care systems.

Trump’s tweet went out the same day the U.S. chartered a deportation flight to Haiti, sending over 124 people to a country that the United Nations has deemed among the least prepared for the pandemic. According to Haiti’s Office National de la Migration, which oversees deportations, 247 Haitian nationals—64 people on April 7, 124 on April 20, 35 on June 9, and 24 on June 23—have been deported during the pandemic. At least three have tested positive for the virus upon arrival to Haiti, as Joseph Jouthe, Haiti’s Prime Minister has reported.

Through my leadership of an anthropological research collective studying the resettlement experiences of deportees in Haiti, I have gathered some of these individuals’ stories. For the past seven months, my three collaborators and I have been meeting with deportees, elected leaders, and governmental and nongovernmental agents to learn about the challenges and opportunities deportees face as they rebuild a home in Haiti. In our interviews, we have repeatedly heard the fears and frustrations of people facing a deadly pandemic with little to none of the protections taken for granted in wealthier nations.

“The life of a deportee is nothing. If I get sick with corona, I die. That’s it. I hear Black Lives Matter … but the life of deported Blacks is not in this. We’re forgotten,” lamented Juliette (a pseudonym), a 54-year-old mother of four who was deported to Haiti in July 2019.

Since late May, protestors proclaiming “Black Lives Matter” have gathered across the nation in the wake of the police killings of George Floyd, Breonna Taylor, Ahmaud Arbery, and many others. Juliette’s comment reminds us that deportations—which disproportionately affect poor people of color—exemplify the devaluation of Black life. She asks us to think hard about all of the Black lives being affected in the American sphere of influence.

Establishing a global network has been a founding principle of the Black Lives Matter movement. From its inception in 2013, the founders stressed that anti-Blackness is a transnational, not merely national, phenomenon, and that to overcome it, we must see the connections between racism at home and abroad. As the movement’s website recounts, “Black Lives Matter is an ideological and political intervention in a world where Black lives are systematically and intentionally targeted for demise.” The point was not merely to say that racism happens elsewhere but that racism in the U.S. has been reinforced in countries under American influence, and that this racism has caused the “specific vulnerability,” as former U.S. President Barack Obama termed it, that renders Black life fragile.

Black migrants in the U.S. are rendered vulnerable in ways that Black citizens are not. Their lives are devalued on the basis of not only race but also immigration status. Deportees in Haiti, especially those deported for criminal matters, also face a two-fold discrimination. Since many of them lived in the U.S. since childhood, they are viewed not as returning citizens but as unwelcome outsiders—a status that is racially encoded. Their dialect, fashion, gait, tattoos, and dreadlocks, for example, mark them as “Black” in an American way, and many in Haiti view American Blackness as not only different but disreputable. “They can bring crime and a bad manner (movez imè) to the country,” an immigration officer in Haiti told me in an interview. “Look at how so many young people now wear their pants under their bottom. That’s the deportee who came with that.”

Since many of them lived in the U.S. since childhood, Haitian deportees are commonly viewed not as returning citizens but as unwelcome outsiders.

“The same questions go through my head all day,” said Thomas, a 60-year-old deportee who returned to Haiti in November after five decades in the U.S. “Who will care for me if I get sick? I have no family here. Where will I go? I have no doctor here, and there is no hospital to go to without money. And I don’t know my way. I have to pay for a helper, and I have nothing. How can I live? Just don’t get sick, I tell myself. I pray for this.”

The prospect of getting sick and dying from the coronavirus in Haiti feels very real to deportees. In the early months of the pandemic, Haiti had recorded fewer COVID-19 infections and deaths than other Caribbean nations, but this has begun to change as more people return to Haiti, including deportees.

The virus is a pernicious enemy, one that manifestly affects those who are Black, Hispanic or Latinx, or Native American more aggressively. In addition to dense urban areas and Native American communities, it has infiltrated prisons and immigration detention centers—places where the virus can spread rapidly among largely nonwhite populations who live in close quarters without adequate access to health care. The three deportees who tested positive for the virus when they arrived in Haiti are believed to have been exposed to it while in detention.

Activists have rightly named health inequity—during but also beyond COVID-19—as one of the issues that Black Lives Matter must urgently address. The entwined challenges that confront deportees should compel the American public to open the borders of our imaginations and sympathies, even if our actual borders remain resolutely closed.

In a letter to the Department of Homeland Security—backed by public health experts, elected leaders, and concerned citizens and migrants—Florida Congresswoman Frederica Wilson called for a moratorium on deportations to Haiti. The country, she wrote, “lacks the public health infrastructure to prevent the spread of the virus or to treat a large number of infected people. … It is unconscionable to repatriate migrants who may be unwitting carriers of the virus into such an environment.”

I recall the words of a young man who had been deported to Haiti from the U.S. and who I befriended as a fellow American while living there in 2013. He came to visit me not long after the founding of Black Lives Matter in the wake of the acquittal of the police officer who shot and killed Trayvon Martin. He felt that deportees understood what Black Lives Matter means much better than most people. Speaking a mix of English and Creole, he grumbled, “A deportee is like garbage, done, finished, thrown away. San valè yo jete l.” The Creole translates as: “Without value, they throw him away.”

No one, citizen or not, deserves that kind of treatment.