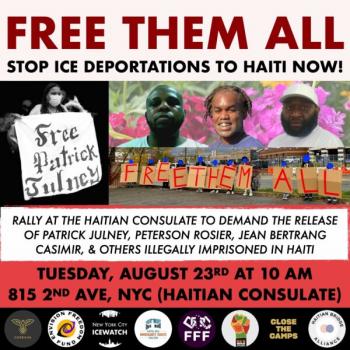 In Haiti’s National Penitentiary, people from New Jersey, Florida, Indiana, and elsewhere are detained in deadly conditions. Packed into overcrowded cells, they lack food, water, medicine, or space to sleep. They were detained almost immediately after setting foot on Haitian soil, without having been charged with any crime or appearing before a judge. For many of the detained, this is the first time they’ve been in Haiti since they were young children. Their detention is illegal under Haitian and international law, in conditions that amount to human rights abuse.

The Department of Homeland Security (DHS) agency, Immigration and Customs Enforcement (ICE), knows that, for many immigrants facing deportation, being sent to Haiti means ending up in illegal, indefinite imprisonment in squalid conditions. Yet the Biden administration refuses to halt deportations to Haiti, even as the country faces a humanitarian crisis and state failure.

Several government officials have called on the U.S. to halt this practice. In March 2022, Congresswoman Ayanna Pressley (D-MA) and Congressman Mondaire Jones (D-NY) called on the DHS to suspend ICE flights to Haiti given the “grave danger” that awaits those who are deported there. In September 2021, the Special Envoy for Haiti, Daniel Foote, resigned over the U.S.’s decision to continue to deport people to Haiti. That same month, 54 members of Congress urged the Biden administration to halt deportations to Haiti given the ongoing political, public health, and economic crises in the country. Despite the outcry, the Biden administration has deported over 25,000 Haitians.

In the past year, countless Haitians have appeared before the U.S. immigration courts to plead their cases for asylum, withholding of removal, and protection under the Convention Against Torture. They argue that if the U.S. deports them, they will suffer persecution and torture in Haiti. Despite the wealth of evidence supporting their arguments, the U.S. continues to deport Haitians. Unfortunately, for dozens of men deported over the last six months, the exact fears they harbored have come true upon their return.

Patrick Julney, Peterson Rosier, Jean Bertrang Casimir, Billy Balisage, Maxis Derilus, and Metellus Peterson are just a handful of those deported earlier this year and immediately arrested and imprisoned on arrival in Haiti. Months later, they remain wrongfully jailed in Port-au-Prince’s National Penitentiary. The Haitian government has not charged them with any crimes nor allowed them to appear before a judge.

Patrick Julney, 38, came to the U.S. at the age of four. He was deported on Jun. 7 and is in a life-threatening situation in the Haitian jail. He is married and has four step-children.

Patrick, Peterson, Jean, and the others wrongfully imprisoned at the National Penitentiary are facing torturous conditions. The penitentiary does not provide them with food, potable water, or medical treatment. They can only receive these basic necessities if they have family or friends on the outside to bring it to them on a daily basis. In late July 2022, widespread gun violence erupted near the prison, making it impossible for even friends and family to enter and deliver food and clean water. As a result, many were left without food for several days. Out of desperation, Patrick and others drank the prison’s polluted water and today remained sickened. They were not alone in this suffering. Eighteen former Colombian soldiers who were involved in last year’s magnicide are also jailed in the Penitentiary and have issued an urgent appeal, having gone over 70 hours without these basic necessities.

The U.S. State Department reports that overcrowding in Haitian prisons is “severe.” In fact, a joint report by the United Nations’ Office of the High Commissioner for Human Rights (OHCHR) and the Integrated Office in Haiti (BINUH) documented how prisoners may have as little as 2.5 square feet per person.  Patrick, Peterson, and Jean share their single cell with at least 37 other men. They do not even have a space to lie down and sleep. Instead, they sleep sitting or standing. Patrick, who has high blood pressure, is suffering from severely swollen feet and legs due to these conditions and lack of treatment.

Families have been asked to pay a bribe of between $4,000 to $6,000 to Haitian police officers in order to free the illegally imprisoned deportees. In 2006, a judge in Haiti ruled that it was illegal for the government to detain deportees from the U.S., but this practice has worsened since President Jovenel Moïse’s assassination on Jul. 7, 2021. Given the country’s current political climate and crumbling judicial system, the men face indefinite detention.

It is clear that the U.S. must halt all deportations, as it has done for Haiti in the past and is currently doing for Ukraine.

The family members of people imprisoned in Haiti, including Patrick Julney’s wife, Laura McMaster, will join with friends and concerned citizens from New Jersey and New York, and will gather outside of the Haitian Consulate at 815 2nd Avenue in Manhattan on Aug. 23 at 10 a.m. to demand freedom for their loved ones. They will be joined by organizers and comrades from Cosecha NJ, Cair Coalition, Black Alliance for Just Immigration (BAJI), Envision Freedom Fund, NYC ICE Watch, Close the Camps, Families for Freedom, the Haitian Bridge Alliance, and many more.

For more information or to get involved, email Haydi Torres at haydit64@gmail.com or follow the Cair Coalition and Cosecha New Jersey on social media.

Haydi Torres is an undocumented Afro-Latina organizer with Movimiento Cosecha in New Jersey. Eleni Bakst, Esq., is the managing attorney at the CAIR Coalition.