Haitian diaspora plans anti-Moïse protests in multiple cities across the U.S. and Canada 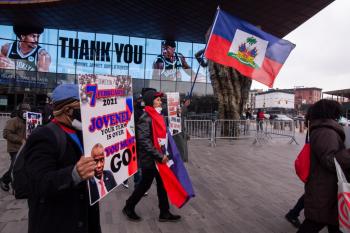 Members of the Haitian diaspora in New York City and surrounding areas gathered at Barclays Center in Brooklyn on Jan. 15 to protest Haitian President Jovenel Moise and his intention to remain in office beyond Feb. 7. Photo by Leonardo March

Haitian-Americans in at least five U.S. cities and Haitian-Canadians in Montréal are planning protests on Jan. 15, as compatriots gather to denounce the rule of embattled Haitian President Jovenel Moïse.

Organizers planning the day of diaspora protests want to let incoming U.S. President Joseph Biden and the international community generally know that Haiti is on the brink of dictatorship, they said.

“We have a new [U.S.] administration coming in on the 20th,” said Long Island-based journalist and activist Edens Debas. “Moïse is trying to do another constitution, he’s trying to do a referendum by himself, and trying to put [Haiti] under dictatorship,” he said.

Debas, host of a radio show on Tout Haiti, said he is organizing a Brooklyn sit-in to protest Moïse, who has illegally and unilaterally issued close to 40 presidential decrees in the past year since Haiti’s Parliament expired on Jan. 13, 2020. The sit-in, one of several scheduled nationwide, is being organized in partnership with the Boston-based New England Human Rights Organization (NEHRO).

Organizers hope that Friday’s event at the Barclays Center, scheduled for 1 p.m., will draw more than 100 people. Debas said protesters for the sit-in will use public sidewalks and thus did not seek a city permit required for occupying the street.

NEHRO President Josué Renaud, in a press release about the protests, listed three demands for a return to democracy in Haiti: that Moïse leave the presidency by Feb. 7;  that a subsequent transition government organize free and fair elections; and that there be  judicial reform to fight impunity, corruption, and financial crimes.

“With one voice, Haitian people from all walks of life in Haiti and abroad are saying enough is enough,” Renaud said, in the press release.

NEHRO collaborators plan to host solidarity demonstrations in France, Brazil, Chile and Cuba, Renaud said in a phone interview, although he could not confirm times or locations.

A solidarity event in Haiti will begin at 10 a.m. local time, in front of the national palace, he said.

In Canada, a public rally is not possible due to a Covid-19 curfew, explained long-time Haiti activist Serge Bouchereau. In coordination with NEHRO’s effort, the Haitian community in Montréal is holding a virtual rally from 8 p.m. to 10 p.m. on Radio Centreville (102.3 FM), Bouchereau said.

The U.S. and Canadian protests come as the Moïse administration faces increased scrutiny from American lawmakers.

Last December, three members of Congress, including incoming House Foreign Affairs Committee Chair Gregory Meeks, of New York’s 5th Congressional District, released a statement criticizing the increasingly authoritarian rule of Moïse. However, they did not specifically ask him to step down.

“His latest actions are reminiscent of past anti-democratic abuses the Haitian people have endured, including the run-up to the Duvalier dictatorship,” the statement read. “When the 117th Congress convenes, supporting democratic actors in Haiti will be a top concern for this committee.”

Also in December, Haitians protested in front of the U.S. Embassy in Port-au-Prince, denouncing U.S. support of the Haitian president and his officials’ alleged complicity in the crime wave gripping Haiti.

The same day, Dec. 10, the U.S. government sanctioned former Moïse administration officials Fednel Monchery and Joseph Duplan, as well as former cop and Delmas 6 neighborhood leader Jimmy “Barbecue” Chérizier, for their alleged role in the 2018 La Saline massacre. Chérizier denies any role in the massacre, saying that he has been falsely accused.

Over the past year, calls for Moïse to step down in February 2021 have grown louder as insecurity has increased — with a near 200% year-over-year increase in kidnappings during the first half of 2020, according to the United Nations. Experts have cited the threat of violence by politically connected gangs as an impediment to a fair electoral process in Haiti this year, The Haitian Times has reported.

Moïse has rejected claims to step down, saying his term ends Feb. 7, 2022. The elections calendar released this month by the president’s hand-picked provisional electoral council (CEP) has been widely criticized by opposition leaders. One reason is that it schedules an Apr. 25 constitutional referendum that opposition leaders say is illegitimate under Haiti’s current constitution.

Haitian opposition leader André Michel of the Democratic and Popular Sector has called for anti-government protests throughout Haiti on Jan. 15 as well.

The NEHRO-organized protests were not planned in collaboration with any Haitian opposition parties, both Debas and Renaud said.

NEHRO has a history of organizing events in support of Fanmi Lavalas, a social democratic party founded by former President Jean-Bertrand Aristide.

Citing pervasive human rights abuses in Haiti, Renaud said a change in leadership is overdue. “We think it’s outrageous, and we decided we will be raising awareness to get some kind of solidarity,” he said.

Following are details about the confirmed protests in the U.S. cities. Organizers aligned with NEHRO said actions in other cities may take place. All times listed below are local.

An earlier version of this article was published by the Haitian Times.