Haitian journalist shot dead, 4 others injured during a workers strike 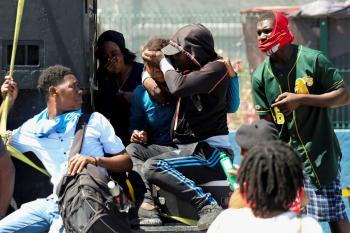 A demonstrator is assisted after tear gas was launched by police during a wage protest in which a local journalist was killed, in Port-au-Prince, Feb. 23. (Reuters/Ralph Tedy Erol)

Armed men in police uniform riding in a vehicle bearing Haitian National Police license plates shot into a crowd of demonstrators, killing one journalist and injuring four other people, during a demonstration by thousands of textile workers to demand a higher minimum wage, according to local reports.

The shooting happened Feb. 23, after police had tried to disperse the protesters on multiple occasions. When the demonstrators began throwing rocks at the men in the police vehicle, they fired, according to Le Nouvelliste.

Maxihen Lazzare, a Rois des Infos photojournalist, suffered wounds to his chest and abdomen, and died at the scene.

Of the four others injured, three were also journalists. Two were identified as Sony Laurore of Laurore News and Yves Moïse who works for RCH 2000. The victims were transported to Bernard Mevs Hospital, where one is in critical condition undergoing surgery.

The other two victims were not identified.

Police spokesperson Garry Desrosiers announced that the Central Directorate of Judicial Police (DCPJ) will start an investigation. The police have yet to say if the gunmen are police officers.

Prime Minister Ariel Henry offered condolences to the journalist’s family over Twitter. He also condemned “the violence that caused multiple injuries” to numerous workers during the demonstration.

Some factories are closed Feb. 24 following the incident.

Textile workers have been holding protests for better pay since mid-January in Trou-du-Nord, a commune in the Northeast Department, and Port-au-Prince. Haiti announced that it will raise their salaries from 500 to 685 gourdes but they’re demanding 1,500 gourdes.

Before the Feb. 23 demonstration, many of the previous ones were also violent as protesters threw rocks at police officers who often tried to disperse them using teargas.

Gang members also shot two journalists dead, John Wesley Amady and Wilguens Louissaint, while they were reporting on the gang violence in Laboule 12, an area in Port-au-Prince Jan. 6.