Haitian migrants in Tijuana reject migration policy of US, Mexico 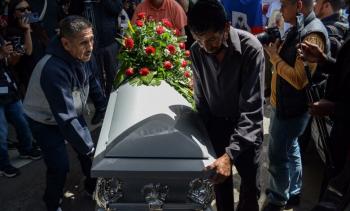 Tijuana, Mexico, Jun 2 (EFE).- Just days ahead of the Summit of the Americas, Haitian migrants in Mexico’s Tijuana denounced a wave of violence since Title 42 – used by the United States to fast track the expulsion of undocumented immigrants during the pandemic – came into force.

With a strong message of rejection of the migration policies implemented by the governments of the United States and Mexico, the Haitian community residing in this city lamented the death of two of its members who, in two separate events, lost their lives on May 5.

At a funeral on Thursday in front of the bodies of Joselyn Anselme, 34, who was killed in an attempted assault, and Caroly Archangel, 30, who died of a heart attack due to alleged medical malpractice, Haitians noted that these policies have left them in Mexico “exposed to violence and without guarantees of access to basic healthcare services”.

Prior to the burial, the nonprofit Haitian Bridge activist Guerlilie Jozof denounced that Joselyn’s death was from the violence in Tijuana, while Caroly was denied medical care in a city hospital.

“We ask the Mexican government to secure the lives of people who migrate and pass through their territory; black lives matter and (…) they are dying every day in this country. We are also here to call for an end to the American policies that are killing our brothers,” she told the media.

“Who is responsible for these deaths? That’s what we want to know,” the activist said.

She said her compatriots were leaving Haiti to escape violence, and were looking for a refuge “but they are rejected and exposed to situations” such as these recent ones.

Jozof added that these two cases should serve as an example for the US authorities to recognize that Mexico is “not a safe country for migrants” and that migration policies like Title 42 leave them vulnerable.

Furthermore, they are “discriminatory” because white-skinned people are prioritized over others, according to the activist.

For her part, Caroly’s sister Dine Archangel said she and her brother had left their country because of discrimination and violence, mainly because she, being from the LGBT community, suffered “such unfair treatment”.

Nicole Ramos, director of the nonprofit Al Otro Lado, termed the Mexican government led by President Andres Manuel Lopez Obrador as “a disgrace”, because “he has sold migrants for American dollars”.

She also referred to Joe Biden’s government as a “disgrace”, because they “pretend” that they are a “country of law and freedom,” but it is a country where “the rule of white supremacy and racism prevails.”

“The blame for all this lies with the two governments, Mexico and the United States, because these policies that keep the border closed cannot exist without the complicity of the Mexican government,” she said.

Meanwhile, the Haitian Bridge reported that, with these two incidents, there have been five cases of Haitian migrants losing their lives under similar circumstances on the Tijuana border since the implementation of Title 42 policy.

This has led to insecurity and fear among the community that something similar might happen to them.

Three days after the announcement of the enforcement of Title 42, the organization Médecins sans frontières (MSF, or Doctors without Borders) in Mexico denounced that the rule “has nothing to do with health or the pandemic and is only a measure for the mass expulsion of migrants”.

It further pointed out that the measure “leaves asylum seekers and migrants stranded in conditions of high insecurity and often places them in situations of immediate danger.”