Haitian Montrealers say Canada has a duty to do more, 10 years after devastating earthquake 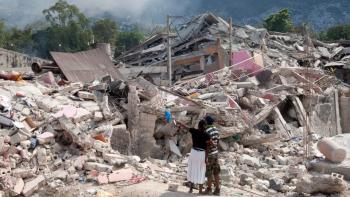 A couple surveys the damage to homes in Port-au-Prince, Haiti on Saturday January 16, 2010. in 2020, Montrealers commemorate the tragedy with two days of activities. THE CANADIAN PRESS/Adrian Wyld

Ten years after the devastating earthquake in Haiti on Jan. 12, 2010 which left more than 200,000 dead and 300,000 injured, two days of commemoration activities are planned in Montreal.

The earthquake left more than a million homeless in the capital Port-au-Prince and the consequences of the devastating magnitude 7 earthquake are still felt today.

"It was the panic everywhere, we saw blood everywhere," said survivor Thecy Pierrelus Kuba. "It was dust, smoke, yelling. We were just in front of the reality that people are dying around us."

Kuba left Haiti for Canada with her family when she was 15. She said they count themselves lucky for being granted citizenship, but noted that hundreds of other asylum seekers were not.

Researcher and filmmaker Nikolas Barry-Shaw said that even after 10 years Haiti is in a state of turmoil. He pointed to the hundreds of Haitian asylum seekers in the United States who were threatened with deportation, despite living in that country for years. Many of those came to Montreal, crossing the border on foot, saying they were afraid of being sent back to Haiti.

"The country is in a state of total political and social upheaval and the cost of living has spiralled out of control," he said.

In his film 'Haiti Betrayed,' Barry-Shaw called Canada partially responsible for that state of affairs, accusing the government of backing a 2004 coup. He said Canada has a responsibility to asylum seekers looking for a better life.

"Those people are relaly not able to go home in large part because of what we've done to the country," he said. "I think we have a huge responsibility to them, to welcome them until things are settled in Haitia because they are clearly not settled at this point."

In Montreal, the Maison d'Haïti initiative is above all a symbol of reflection, hope and solidarity with survivors and the Haitian community.

Forty groups, organizations and artists will participate on Saturday and Sunday in workshops, conferences, documentary film screenings and round tables.

All of the commemoration activities are free of charge on the TOHU website, located in the heart of the Haitian community of Montreal in the Villeray-Saint-Michel-Parc-Extension borough.

Maison d'Haïti executive director Marjorie Villefranche said that the last initiative of its kind dates back to five years ago, and attracted 2,000 visitors over three days. Just like today, the Maison d'Haïti joined forces with Tohu to hold commemoration activities.

According to Villefranche, the Haitian diaspora has some 150,000 people in Canada, almost all of whom are based in Quebec and the greater Montreal region.