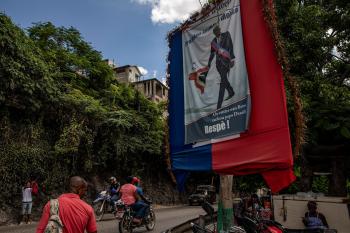 President Jovenel Moïse, who was assassinated in July, led Haiti by decree and turned to authoritarian tactics.Credit...Adriana Zehbrauskas for The New York Times

After Haiti’s president was assassinated and the country slid into turmoil, Ariel Henry became head of the government, responsible for bringing the killers to justice and helping the country heal.

But new evidence suggests that Mr. Henry maintained communications with a prime suspect in the case — and that the two stayed in close contact even after the murder.

The assassination of President Jovenel Moïse in July plunged an already troubled nation further into disarray, with many of its public institutions in tatters, a capital under siege by gangs, a collapsing economy and the few elected leaders left in the country sparring for control of the government.

Mr. Henry’s ascension to prime minister promised to smooth some of the rifts, earning pledges of support from overseas and potentially paving the way toward elections. He pledged to bring the assassins to justice, curb the violence and usher in a period of political unity.

But the investigation into the assassination stalled, and concerns about Mr. Henry’s commitment to solving the murder emerged soon after. They center on his connection to Joseph Felix Badio, a former justice ministry official wanted by the Haitian authorities on suspicion of organizing the attack that killed Mr. Moïse.

Phone records seen by The New York Times, as well as interviews with Haitian officials and a principal suspect in the crime, reveal potentially incriminating details about the two men’s relationship. Among them: Mr. Badio spoke to Mr. Henry before the killing and afterward, including in two calls for a total of seven minutes the morning after the assassination.

Then, when Mr. Badio was wanted by the police, he visited Mr. Henry, according to two Haitian officials with knowledge of the investigation.

Four months after the assassination, the officials said, Mr. Badio went to Mr. Henry’s official residence twice — both times at night — and was able to walk in unimpeded by the prime minister’s security guards, despite being on the run from the police.

It is unclear whether Mr. Henry, who is now the country’s prime minister, did anything to help the suspects, most of whom were eventually captured or killed by police. A spokesperson for Mr. Henry said that, despite the phone records, he did not speak to Mr. Badio after the assassination and that he has no relationship with the suspect. Mr. Badio was unreachable for comment.

But Haiti’s former chief prosecutor, who was removed from his post by Mr. Henry, has called on the prime minister to answer questions in the case. And now, one of the main suspects in the investigation has offered extensive details about what he called the trusting relationship Mr. Badio had with Mr. Henry.

Understand the Assassination of Haiti’s President

On July 7, 2021, President Jovenel Moïse was killed in an attack at his private residence on the outskirts of Port-au-Prince.

In an extensive interview with The New York Times in an empty construction site while he was on the run from the authorities, Rodolphe Jaar, a Haitian businessman and former drug trafficker, admitted helping finance and plan the plot.

Shortly before the assassination, Mr. Jaar said, Mr. Badio told him that Mr. Henry would serve as a useful ally after the president was overthrown.

“He is my good friend, I have full control of him,” Mr. Jaar recounted Mr. Badio telling him when Mr. Henry, a 72-year-old neurosurgeon, was named prime minister.

After the assassination, Mr. Jaar said he and Mr. Badio stayed in contact with one another while dodging the authorities, and that the two even shared a safe house several days after the murder.

In the hours after the killing, when police officers trapped the Colombian mercenaries accused of carrying out the assault, Mr. Jaar said Mr. Badio had sought help from Mr. Henry to escape. According to Mr. Jaar, Mr. Henry responded that “he would make some calls,” though his claims could not be independently verified.

Mr. Jaar claimed that he thought the goal of the plot had been to depose, not kill, the president, and that he has been caught in a larger political game that he still does not fully comprehend. He was detained in the Dominican Republic on Friday after six months on the run, according to a senior security official in the country.

According to Mr. Jaar, the plotters intended to swear in a former Supreme Court judge, Windelle Coq-Thélot, as the new president. His account suggests that they expected support from key elements of the Haitian state, including the security forces, in their coup attempt.

But whatever plan there may have been to capture, not kill, the president was scuttled when gunmen burst into his home and assassinated him in his bedroom. How and why the plan switched — from forcing the president to step down to assassinating him — Mr. Jaar contended that he did not know.

Mr. Henry’s phone calls with Mr. Badio were first revealed in September by a top Haitian prosecutor at the time, Bedford Claude, who called on the prime minister to explain them in court.

But Mr. Henry moved swiftly against the officials who tried to investigate his links to Mr. Badio. And the extent of the contacts between the two men — including the assertion by officials that Mr. Badio went to the prime minister’s residence while on the run from the authorities — had not been previously made public.

After Mr. Claude called Mr. Henry for questioning, his supervisor, the minister of justice, Rockfeller Vincent, said he received a call from the prime minister, who asked him to fire the prosecutor. Mr. Vincent said he refused. Days after, Mr. Henry fired them both.

“I believe he provides one of the key elements in the assassination,” said Mr. Claude, referring to Mr. Henry.

Mr. Henry’s spokesman said the officials were fired for violating the law in order to advance their political agendas, including breaking a ban on summoning senior officials to court.

In an interview a month after the murder, Mr. Henry said his main goal was to hold new elections and then step down. He has not set the date for the vote.

Mr. Jaar also implicated another senior member of Mr. Henry’s government: the police chief, Frantz Elbé. During a meeting to discuss the plot, Mr. Jaar said, Mr. Badio called Mr. Elbé, a senior police adviser at the time, and asked him to help procure weapons for the coup. Mr. Elbé told Mr. Badio that he did not have the guns, but also did not try to stop the coup from happening, Mr. Jaar recounted, without providing independent evidence.

Mr. Henry promoted Mr. Elbé in October to lead the Haitian National Police. Mr. Elbé did not respond to requests for comment.

Mr. Jaar, a Haitian-born descendant of Palestinian immigrants, spent three years in a United States prison for trafficking cocaine. On his return to Haiti in the mid-2010s, he said he quit the drug business and built a chain of poultry shops in the capital, Port-au-Prince.

He claimed he was recruited into the plot in late May by Mr. Badio through a mutual friend. Mr. Jaar said he joined out of disgust with the president’s growing authoritarianism, and out of hope that he’d get preferential business treatment from the new government.

Mr. Jaar said he did not know whose orders Mr. Badio was following, or who the ultimate mastermind was.

He said he agreed to join the conspiracy because he was told by Mr. Badio and other plotters that it had the full support of the United States, which, according to them, was getting nervous about the president’s supposed links to terrorists and drug traffickers.

“If the U.S. government was involved, then it was safe,” said Mr. Jaar, outlining his thinking at the time.

No evidence has emerged that any of the named suspects had any active connection to the American government, or that the United States was involved in or aware of the plot.

There are, however, at least six American citizens and residents who are accused by the Haitian police of participating in the plot. A former Colombian commando accused of taking part in the assault, Mario Palacios, was charged in Florida on Jan. 4 with conspiring to kill Mr. Moïse.

Mr. Jaar said that he contributed about $130,000 to the plan, helped find the guns and provided the house from which 21 retired Colombian commandos set out for the presidential residence shortly after midnight.

Haitian security officials said the assault on the presidential residence was intended to be carried out by criminal group called Phantom 509, which is made up of former and current police officers and has strong political links.

Mr. Jaar said he and Mr. Badio had met with a man claiming to be a Phantom 509 leader to discuss the plot, but that the gang pulled out about a week before the murder, for reasons he said he did not know. Mr. Jaar said that was when former Colombian soldiers, who were supposedly brought in to provide security for the president’s successor, were told that their mission had changed — to storming the presidential residence.

Mr. Jaar claimed that he did not know how the plan to arrest Mr. Moïse turned deadly, with the president shot 12 times in his bedroom.

But minutes after the murder, Mr. Jaar said he received a phone call from Germán Rivera, the leader of the Colombian mercenaries.

“The rat is down,” Mr. Jaar said Mr. Rivera told him, using a derogatory code name the plotters used for Haiti’s leader. “The president is dead.”

Maria Abi-Habib contributed reporting to the article from Mexico City.