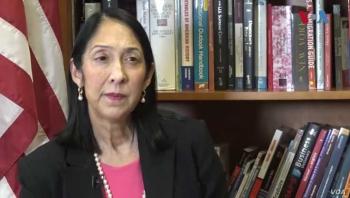 Hundreds of protesters marched from downtown Port-au-Prince, Haiti's capital, to the U.S. Embassy on Friday to demand the Trump administration stop supporting President Jovenel Moise, who is named in the latest corruption report issued by Haiti's Superior Court of Account and Administrative Disputes.

Protests were also held in the northern city of Cap-Haitien.

"America is a country of institutions, America is a country of laws, so Americans should understand that Haiti is facing a crisis — they should stop giving us handouts and teach us instead, accompany us and help us organize so we can lift ourselves out of this situation," one protester told VOA's Creole Service.

Undersecretary of State for Political Affairs David Hale arrived Friday for a meeting with Moise and Foreign Minister Bocchit Edmond to discuss Haiti's need for an inclusive national dialogue and a functioning government capable of restoring order, maintaining rule of law, expanding the economy, and serving the Haitian people, according to a U.S. Embassy statement. Hale was to meet with members of the Haitian opposition on Friday, and with members of the civil society and the private sector.

"We heard that American envoy David Hale arrived in the country today to negotiate with us to keep Jovenel Moise in power," a female protester told VOA. "But we, the people, are ready to march today to let the Americans know we are not interested in negotiating with them. We are asking for Jovenel Moise's resignation, arrest and judgment for his crimes against the people."

"We consider Jovenel (Moise) to have fallen already, but the Americans are propping him up. They are our friends, so we will talk to them and say it's time to let Jovenel go," he told VOA on Thursday. "As long as Jovenel is in power, we'll keep protesting."

"We thought the United States was a friend of Haiti, but today they have shown us they are our biggest enemy," a protester told VOA Creole. "We are asking the United States, France and Canada — everyone knows they took (former president) Jean Bertrand Aristide (off our hands) in 2004, so what we want to know is, when you look at the situation today, is it better than how it was in 2004? That's what we want to know."

Although protests waned in November, they returned this week and are now targeting the United States and France. Protesters reject calls for a national dialogue and insist the only conversation they are willing to have is about Moise's departure. They vow to keep protesting in front of the U.S. Embassy until their demands are met.

Yves Manuel in Port au Prince, Ronald Cesar in Washington and Yvan Martin in Cape Haitian contributed to this report.