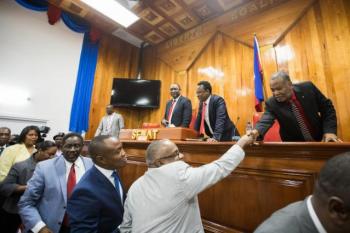 The Haitian Senate has approved a law that makes it a crime to “publicly demonstrate support” for gay rights.

The law, greenlit by lawmakers in the Caribbean country this week, would make it a crime to take part in or be witness to a same-sex union.

People who take part in same-sex weddings can also face criminal charges, with a maximum of three years in prison for “the parties, co-parties and accomplices” to a same-sex marriage. However, it goes a lot further than simply outlawing banning gay weddings, by also attempting to stamp out all public support for equality.

The Russia-style law creates a new offence for a “any public demonstration of support for homosexuality and proselytizing in favour of such acts”.

If signed, the law would amount to  a draconian attacks on free speech, LGBT activists fear.

The law was sold to lawmakers as a way to ban same-sex marriage, even though marriage is already defined under Hatian law as a union between a man and a woman.

Senate President Youri Latortue told AFP: “All senators are opposed to same-sex marriage, so this simply reflects the commitments the senators made during their campaigns. “Although the state is secular, it is people of faith who are the majority. A country has to focus on its values and traditions. Some people in other countries see it differently, but in Haiti, that’s how it’s seen.”

Charlot Jeudy, president of LGBT rights group Kouraj, said: “We see this as an attack on the LGBT community in this country. “This text divides our society, it reinforces prejudices and discrimination. It’s really a pity.” The bill now heads to the lower house.

LGBT rights have been under fire in Haiti for some time. Last year the government banned an LGBT festival that had been set to take place in Port-au-Prince.

In 2013, a same-sex engagement celebration in the country was attacked by a violent mob.

A homophobic mob threw Molotov cocktails and rocks at the couple. Several people were injured, two cars were set ablaze and windows were smashed at the residence where the ceremony took place.

Following the devastating 2010 earthquake in the country, a number of homophobic preachers blamed homosexuals for incurring the wrath of God – as attendees of an LGBT support group were among the casualties in a building collapse.

The following is a note from the IJDH Staff:

This bill allows for further marginalization and mistreatment of the LGBT community by stripping them of their rights to protest over their treatment. The senators used the Article 3 of Haiti’s Constitution to back up their vote. The bill will soon go to the Chamber of the Deputies and is expected to pass. Although, if the both chambers pass the bill, it will not become law of the land until President Jovenel Moïse signs and publishes it in the country’s official Journal, Le Moniteur.