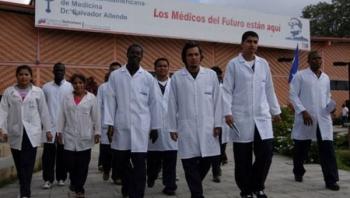 By teleSUR, August 24, 2017
Some 58 medical students from the IV Cohort of Haitian Doctors graduated Tuesday after studying in Venezuela's Latin American School of Medicine, offering praise and thanks for the experience.
“Today, we want to say THANK YOU to all of Venezuela. It is an eternal, immense, infinite thank you, full of love. A thank you loaded with the best wishes from our families and from all the Haitian people towards the Venezuelan people,” the organization said in a writing statement.
The body of students recounted their journey from Haiti following the earthquake that shook the country in 2010 and the first few days in the Bolivarian nation.
“We did not understand much of what they were talking about. We did not speak Spanish; But we saw the smiles, we felt the warmth of the love of this country that has welcomed us,” the students said.
“In ELAM, it was almost impossible to think that there could be so many differences of culture in one space so small. There were young people from more than 28 countries on 3 continents. The ELAM is the House of the World, a world in miniature," the statement read.
The diversity of the school allowed for open studies of culture, science, foods as well as an opportunity to share customs and ideas in a welcoming environment. The students praised the teachings of Chavez which showed them a new perspective on society and on public health.
“Today, here we are the 58 doctors, graduates of the ELAM, ready to go start the mission that Chavez has entrusted to us: alleviate the pain of our peoples with love and humanism. Haiti has 58,000 reasons to celebrate. As they say there, in our country, ‘la sante se richès’ (health is wealth), more doctors for our people means more health, more wealth,” the letter read.
"It was a wonderful, unique and exceptional experience that left its mark on us forever. Everything that we live there leaves us with many lessons one of the most relevant is: A world of peace is possible only with TOLERANCE. To tolerate is to love," they wrote.
“Chavez' ideals will be present and we will continue being the faithful soldiers of the great battalion in white coats. We will continue to fight alongside Venezuela against the economic war and the imperialist harassment until FINAL VICTORY!”
The letter ended with a final thank you to all they had encountered for their thoughtfulness, consideration, and understanding.
“Today, we will leave here, but we carry the flavor, the love and the light of Venezuela not only in our skin but also in the deepest parts of our hearts,” they concluded.
Posted August 27, 2017