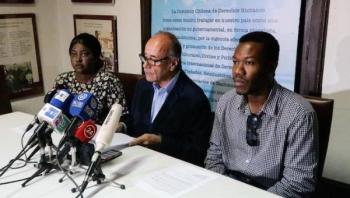 The Chilean Human Rights Commission (CCHDH) and about a dozen Haitian, women’s rights and pro-immigrant organizations said on Monday that they were seeking justice for the women who were sexually abused by Chilean soldiers participating in UN peacekeeping operations in the Caribbean nation.

A recent report published on the academic website The Conversation and cited by The New York Times said that Haitian women were the victims of rapes at the hands of UN Mission for the Stabilization of Haiti (MINUSTAH) soldiers between 2004 and 2017, with about 20 percent of the sexual assaults being committed by Chilean soldiers.

Members of the UN mission, which ranks as one of the four with the most sexual abuse complaints in the world, allegedly raped and sexually abused scores of women, abandoning at least 265 children they fathered in Haiti.

Chilean soldiers, according to the report, were implicated in the third-most cases, trailing only military personnel from Brazil and Uruguay, and Cap-Haitien, where Chile’s troops were deployed, is home to 8.7 percent of the children fathered by MINUSTAH soldiers.

CCHDH director Carlos Margotta said the Chilean army should take responsibility for the actions of its men, adding that “they should be very concerned” and should cooperate with judicial authorities to avoid becoming “accomplices in these incidents.”

Margotta said in a statement that the CCHDH’s mission was “to try to prevent impunity from occurring with respect to these serious crimes, as happened in other crimes against human rights in which Chilean soldiers participated.”

The mission stayed on in the Western Hemisphere’s poorest country after the magnitude-7 earthquake that devastated Haiti in 2010.

Emmanuele Cimeus, executive secretary of the Haitian Sociocultural Organization of Chile, told EFE that different groups within the Haitian immigrant community, the third-largest after Venezuelans and Peruvians, have launched an independent investigation of the abuse allegations.

“It is a very tough time for us here, we feel angry and are disappointed about the abuses of power. Hopefully, someday the authorities will become aware of what happened,” Cimeus said.

The report that brought this situation to light was written by Sabine Lee, a history professor at the University of Birmingham, and Susan Bartels, a clinician-scientist at Canada’s Queen’s University.

A team of researchers spent the summer of 2017 gathering information and interviewing nearly 2,500 Haitians about their experiences in communities where peacekeeping operations were based.