Haitians abroad give their country $2 billion a year. Now the government wants more. 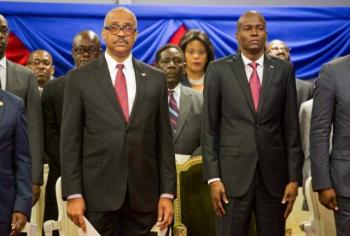 Haiti's President Jovenel Moise, right, stands with new Prime Minister Dr. Jack Guy Lafontant during a ceremony at the National Palace in Port-au-Prince, The two have endorsed a $2.2 million budget that Haiti’s Senate is currently debating. It includes enforcement of a tax that many in Haiti’s diaspora are opposed to. Dieu Nalio Chery AP

In 1765, colonists living in America and Canada were expected to pay into the treasury of the British monarch, sparking the famous no-taxation-without-representation rallying cry and, ultimately, the American Revolution.

Now 250-odd years later, Haitians from Miami to Montreal are embroiled in their own tax revolt. The Haitian government is seeking to levy a universal tax on all its citizens, on and off the island.

And even though it’s a small amount — 10,000 gourdes or $159 annually, depending on the exchange rate — the reaction has been no less vehement. For some 2 million Haitians living abroad, who already contribute $2 billion a year in remittances, essentially doubling the country’s annual budget, the insult is clear.

“We need to retaliate,” said Dr. Lesly Kernisant, a New York gynecologist, whose emailed French post entitled “Diaspora: Enough is Enough” in response to the proposal went viral. “We’re not retaliating against our people, but Haitian leaders because they don’t seem to get it.”

Anger erupted last week after the new tax was leaked on social media. It is among several new revenue schemes — fee hikes for property ownership, passports and traffic infractions, and marketing $285 million in bonds to the diaspora, among others — that Haitian President Jovenel Moïse and Prime Minister Jack Guy Lafontant are proposing in their ambitious $2.2 billion draft budget. The budget also includes a 74 percent boost in salaries, cars, staff and travel per diem for members of parliament.

After the fee was dubbed by critics as a “diaspora tax,” its defenders — from the head of the Haitian IRS to the minister of finance to one of the country’s best-known comedians and government supporter, Tonton Bicha — took to the airwaves and social media. They denounced as untrue rumors that Haitians living abroad would be forced to pay as soon as they arrive at the airport in much the same way visitors must now pay a $10 tourist tax.

Under the proposal —which has technically been on the books since 2005 but unenforced — Haitians will need to show proof they have paid at least some income tax or they will be charged the fee when they request any sort of government-issued document or state service. If they reside outside the country, they have to prove they’ve paid taxes there. The fee will be charged every year.

“Haitians living abroad, what you should know is that Haiti is your country” he said in the message directed at the diaspora. “You can enter [Haiti] as freely as you wish. But if you come from abroad and you come to do a transaction in your country, which is Haiti, purchasing a house, purchasing a car, purchasing land, that means you are someone who has some means. Since you aren’t working in Haiti and there is no real way to evaluate your revenue ...the government has fixed [an amount] for you and generally any foreigner who has come to do a transaction in the country.”

The explanation, however, has done little to satisfy people like Kernisant who is threatening to organize a diaspora-wide boycott of Haiti — “No airlines and money transfers. ...We essentially will paralyze the country” — to teach the government a lesson, if it insists on enforcing the tax.

“I understand you need the tax,” he said. “But if I have to pay taxes, I should at least be able to contribute to the political structure of Haiti. ...Taxation without representation will no longer be acceptable.”

Others have responded with video skits protesting the tax, and one group of Haitians went as far as starting a change.org petition. So far, it has 6,508 signatures.

It’s not the money, Haitians say. There is universal agreement that Haiti, which already collects one of the highest taxes on airline tickets in the Caribbean region at $88.90, can use the cash. It’s still reeling from last year’s strike by Category 4 Hurricane Matthew along its southern peninsula and struggling to rebuild from the 2010 earthquake amid a 50 percent drop in foreign aid.

But the lack of accountability and transparency about how the country’s leaders will use the money is unacceptable, they say.

“We are paying school for people we don’t even know,” said Francois Leconte, a Haitian activist in Broward County who heads the Community Health and Family Service. “For the past five years, the government has been collecting $1.50 per wire transfer, and we’ve yet to get a report on how much was collected and how they have been using that money.”

The $1.50 surcharge on every wire transfer was instituted in 2011 by former Haitian President Michel Martelly, along with 5 cents a minute on international phone calls into Haiti to raise an estimated $100 million for education in the country. But six years later, the taxes still haven’t been approved by parliament — even as the government continues to collect the surcharges. Meanwhile, one of the biggest beneficiaries of the funds, a subsidized education program that pays private schools to provide free education for kids unable to get into a government school, has been plagued by corruption after it was discovered that private schools created fake students to earn more money.

On Tuesday, another education-related corruption scandal hit. This one involved the minister of social affairs and labor who was fired on grounds he overcharged the government for school supplies, further eroding possible support for the new tax.

“When we hear that the minister of social affairs and labor is ... basically trying to steal the money, that doesn't inspire confidence that this government can appropriately manage the taxes it wants to levy against us,” said Leconte. “We cannot vote. The ministry of diaspora is poorly managed. But yet, whenever they need money they just come to us. We cannot take it anymore.”

Along with Guatemala, Haiti has one of the lowest tax collection rates in the region, and Haitians are notorious for not declaring their income for tax purposes. In at least two instances, prime ministers even paid five years’ worth of income taxes in one day, once they were nominated.

Internal debate over the budget has gotten heated. During one meeting earlier this week at the president’s residence with allied senators, Moïse insisted that senators vote the budget as is. The tax is a line item in the 202-page budget, which won initial approval from the lower house and is due for a final vote in the Senate as early as Monday.

The diaspora’s anger over the proposition is bringing together different factions. Both Senate President Youri Latortue and opposition Sen. Evaliere Beauplan, who don’t always agree,have come out against it. Beauplan, who heads the Senate Finance Committee, said his committee will push to vote down the entire budget if the tax isn’t removed.

“I am doing this both for the diaspora and the country,” he said. “We have a country where three-fourths of the people aren’t working, and now you’re going to require students and the poorest of the poor to pay this before they can even get a paper notarized or even a birth certificate?”

Jean Ebens “BossBens” Jerome, a transplanted Haitian who has a Creole-language Montreal television show that airs in the U.S., France and Haiti, said he has heard from caller after caller who oppose the idea.

“I know that in all countries we have to pay taxes for development so people can find electricity, running water and roads,” Jerome said. “But unfortunately in Haiti, they ask you to pay taxes and they don’t do anything with it. In 2017, we have a country where you can’t breathe. Garbage is everywhere, even next to the parliament and no one says anything.”

He is frustrated, he says, as are others, that the Haitian government sees them as “an ATM.”

“We are the ones who are helping Haiti. We are the ones paying for the school for all of these children. They should respect us but instead they are taking us for fools.”