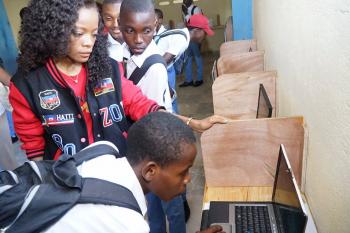 The streaming service Netflix on Saturday removed the ninth episode of its History 101 documentary series after it provoked angry protest from Haitian Americans who launched a social media, email and telephone campaign to get the episode pulled.

The series, entitled “AIDS,” retraced the history of the disease from Africa to the United States and placed Haiti at the center of the epidemic. That framing immediately sparked outrage and a petition campaign on Instagram and Twitter, which caught the attention of some of the Haitian-American community’s top influencers.

“The biggest issues [are] irresponsible framing in regards to black communities worldwide and the inclusion of misinformation,” Haitian-American DJ Michael Brun tweeted. “We can’t let these things slide.”

For Brun, who has made a name for himself blending traditional Haitian beats with electronic music, and Wanda Tima, the founder of L’Union Suite, the popular Haitian-American social media platform, the AIDS documentary was more than just an ill-advised decision at a time when blacks are taking to the streets to demand a change in the way they are perceived. It revived a three-decades old stigma that incorrectly blamed Haitians for the disease.

“It didn’t have any perspective of any Haitians or Africans, especially at this moment,” Brun told the Miami Herald.

On his Instagram account, the musician went even further. Not only did the documentary not have one “scientist or representation from the continent” of Africa, but it didn’t speak to Haiti’s progress in the treatment of the disease.

“Haiti has one of the world’s leading HIV/AID research institutes (GHESKIO) that helped bring infection numbers down both in [the] country and around the world,” he added, referring to the treatment center run by Dr. Jean William “Bill” Pape, who today is co-president of the presidential commission on the response to the novel coronavirus. “How is that not important info to share in a [documentary] about the disease?”

Netflix hasn’t made any official statement about the controversy, but the episode is no longer available on its platform.

Brun said by the time he got someone at Netflix on the phone, the company was already aware of the controversy. Employees had already been bombarded with phone calls, emails and a petition from angry Haitians.

Tima, the founder of L’Union Suite and the Haitian-American Facebook page, said the mobilization to force Netflix to pull the episode was “ a collective effort.”

Tima said she got involved after an Instagram account belonging to XEAUX, tagged L’Union Suite, Brun and others on Friday, asking, “Can you please help me get this out.” A May 18, Instagram post by the account’s user said @Netflix HIV/AIDS DID NOT COME FROM HAITI REMOVE this from your platform immediately.

Tima said after learning about the episode, she immediately started researching the program, found phone numbers and social media contacts for everyone associated with the production. Among her findings: the program was produced by ITN Productions out of the United Kingdom.

“I posted everything I could find out about it,” said Tima, who also asked her platform’s 300,000 followers on Facebook, as well as those on Instagram and Twitter to contact everyone at ITN Productions and Netflix associated with the film to get it removed.

Less than 24 hours later, it was gone.

“If you are going to put energy into telling a story, then you should be responsible,” Tima said. “With everything going on right now with blacks trying to make sure our story is told correctly, the last thing we need is to be re-stigmatized on a topic we fought hard and spent years protesting to clear our name on.

“For any company to release a misinformed documentary on a subject that stigmatizes a whole group of people and country, and make no mention of the marches, the science that refuted it, it just irresponsible,” she added.

This is not the first time that Haitians have protested the stigma associated with AIDS, or their erroneous portrayal.

In 2017 President Donald Trump felt the wrath of the community following a New York Times story that he described Haitian immigrants as having AIDS during an anti-immigration rant with top advisers in the Oval Office. The White House denied the allegation but it didn’t stop everyone from Haiti’s ambassador to the U.S. at the time, Paul Altidor, to renown Haitian-American writer Edwidge Danticat from responding.

Thirteen years earlier, the community also voiced it’s outrage when the video game Grand Theft Auto: Vice City included a line, “Kill all the Haitians.” Joined by the Haitian president who threatened to sue, Haitians protested and the New York-based company that owned the game removed the line.