Haitians have no reason to trust Canadian ‘assistance’ 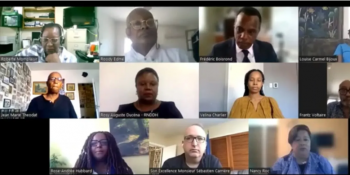 If the Canadian government was really trying to “help” Haitians solve their political and insecurity crisis it would criticize police who kill protesters.

In recent days Ottawa has aggressively taken up the Haitian cause. On Wednesday Canada’s ambassador to the United Nations Bob Rae met the president of the Dominican Republic, Luis Abinader, to talk about Haiti. The somewhat unusual move — heads of state generally meet each other — was explained by the fact Canada leads the UN Economic and Social Council’s Ad Hoc Advisory Group on Haiti.

Prior to traveling to Santo Domingo, Rae was in Port-au-Prince. He met Haiti’s de-facto Foreign Affairs Minister Jean Victor Geneus and civil society actors. Rae held a press conference with Haitian media and released a number of statements and tweets about Canada’s desire to assist.

At the Organization of American States (OAS) last week Canada’s permanent representative to the organization, Hugh Adsett, said “we continue to feel that the international community in collaboration and in consensus with Haiti can play a crucial role” in Haiti. Adsett added, “Canada is ready, willing and able to accompany Haitians on this path to emerge from the crisis but the solutions must come from within Haiti.” The statement was made just after Canadian-backed OAS head, Luis Almagro, published a statement on Haiti and called for the return of United Nations soldiers to the country.

Last month Ottawa supported a year-long extension of the UN Integrated Office in Haiti (BINUH). “Canada welcomes the renewal of BINUH UN ’s mandate by the UNSC”, tweeted Canada’s Mission to the UN. In his interview with Haiti’s Le Nouvelliste Rae said he “works closely” with BINUH head Helen La Lime. In that interview Rae dismissed as “ridiculous” the notion — believed by many Haitians — that the foreign powers want chaos to justify extending BINUH and possibly resending UN troops.

Canada’s ambassador to Haiti, Sébastien Carrière, accompanied Rae during his meetings and has recently clamored for major changes in Haiti. Last weekend Carrière hosted a webinar titled “Haiti, sortie de crise: quel accompagnement du Canada” (“Haiti, emerging from the crisis: what support from Canada”). The event included multiple Haitian actors and was led by Canadian government-funded Haitian-Québec journalist Nancy Roc, a virulent opponent of Haiti’s elected president in the early 2000s. (When I challenged panelists at an August 2005 conference in Montréal titled “Haiti: A democracy to construct” for failing to mention the February 29, 2004 US/France/Canada coup or violence unleashed by the coup government, Roc called me a “Chimères”, a purported pro-Aristide thug.)

On social media Haitian diaspora activists suggested the aim of the webinar may have been to legitimize further foreign intervention. They believe Ottawa may use the event to say Haitian actors were consulted.

Among his multiple recent interventions Carrière boasted about Canada spending $30 million on the Haitian police in 2022. On August 10 the federal government approved the export of Canadian-made armored personnel carriers to the Haitian police. Since ousting the elected government in 2004, Canada has devoted significant resources and political capital to the Haitian police. But in Les Cayes the police reportedly killed two protesters on Tuesday while simultaneously repressing protesters in other cities. Canadian officials have stayed mum on the repression at demonstrations against growing insecurity and soaring prices. This week tens of thousands demonstrated to demand the departure of Prime Minister Ariel Henry who was selected a year ago by the Core Group (representatives of US, Canada, France, Brazil, Spain, Germany, EU, UN and OAS).

It is unclear what Ottawa’s immediate objective is in Haiti. Does it want a new UN military or police force? Some are suggesting foreign countries want to contract private security forces.

Irrespective of their plan, there is little reason to believe Ottawa’s rhetoric claiming a desire to assist solutions “coming from within Haiti.” During this century Canada has helped destabilize an elected government, planned a coup and invaded to topple a president. It also trained and financed a highly repressive police force, justified their politically motivated arrests and killings. Ottawa has also backed the exclusion of Haiti’s most popular party from participating in multiple elections and helped fix at least one election. After a terrible earthquake Canada dispatched troops to control the country and later propped up a repressive, corrupt and illegitimate president facing massive protests. Ottawa has also been part of a coalition of foreign representatives that openly dictate to Haitian leaders.

Considering Ottawa’s recent history no one should trust Canadian claims about assisting Haitians. But even if you ignore the last two decades and stick to policy this week, why trust officials who refuse to even criticize police who kill protesters?