Haitians look to China, Russia to veto another UN-endorsed invasion 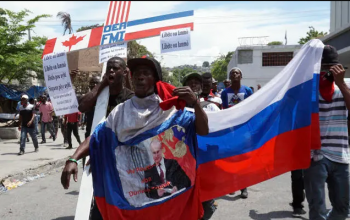 When you’ve been beaten down so long, anywhere can look like up to you.

The current crisis in Haiti suggests that if you subjugate another nation long enough its people won’t just hate you but will glorify your adversaries.

Canadians and Americans are “monsters” responsible for “chaos” in Haiti, opined a protester two weeks ago while demonstrators burned tires in front of the Canadian Embassy in Port-au-Prince. A number of protesters flew Russian flags and in one widely circulated image three individuals on a motorbike had their torsos painted in Russian colours. A week ago a protester explained, “we don’t need Canada, France and the US. We just need China and Russia to come to help us exploit our wealth; the others have already stolen from us.”

Many Haitians dislike the US and Canada so much that they back their rivals. But the Haitians rallying behind Russia and China also have a positive, practical, motivation. Those two countries have veto power at the UN Security Council and Haitians want them to block Washington’s push to have the international body okay a military intervention. So far Russia and China appear to have largely halted the USA’s plans at the Security Council, which may in some way be credited to those waving their flags or wearing their colours. (In a major foreign policy speech last week Vladimir Putin boasted about Russian flags waved in Latin America so the protesters are on Moscow’s radar.)

At a broader level, the pro Russia/China protesters are seeking a multi polar world. Haiti’s impoverished masses could greatly benefit from the emergence of a genuine rival to the US dominated geopolitical order. Appealing to China and Russia to assist with exploiting Haitian resources is a recognition that a countervailing power could benefit Haiti’s majority by offering alternative trade terms or sources of financing. As with many in Latin America and Africa, Haitians understand that a viable rival to the US (even if equally malign) would increase the space to maneuver by playing competing powers off of each other.

Someone on my Twitter recently suggested that Haiti’s best option is to join China’s Belt and Road initiative. I’d guess that most Haitians would be sympathetic to the idea. But Haiti would first have to stop recognizing Taiwan — the fact it has not done so reflects its long-standing subservience to Washington.

The US would react aggressively to Haiti joining the Belt and Road initiative as they did when René Préval joined Venezuela’s discounted oil program, which is far less threatening to US power. Despite admitting that Haiti “would save USD 100 million per year from the delayed payments,” the US Embassy aggressively opposed PetroCaribeaccording to revelations from US diplomatic cables made available by WikiLeaks. “Post [the Embassy] will continue to pressure Préval against joining PetroCaribe,” Ambassador Janet Sanderson wrote in an April 19, 2006, cable. During a spring 2007 visit to Washington President Bush raised the subject with Préval after which Sanderson expressed “hope that President Bush’s clear message on Venezuela sank in, but only time will tell.”

One reason the US and Canada pushed to hold elections amidst the devastation caused by the 2010 earthquake and subsequent cholera outbreak was a desire to be rid of Préval due to his joining PetroCaribe. And when Haiti’s electoral council had Jude Celestin, the candidate for Préval’s Inite party in second place in the presidential election, those two countries intervened to block Celestin from the second round of the vote.

While many Canadians likely view Haitians waving Russian flags as an endorsement of that country’s violence in Ukraine or elsewhere, it actually has more to do with Canada. Many Haitians are so angry at Canadian policy and desperate to get out from under the US/Canada imperial boot that they lionize a powerful adversary.

Haitians yearn for a multipolar world even if many leftists in North America ignore its importance.