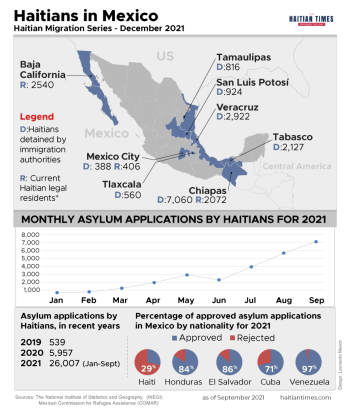 Mexico has become a transitional ground for many Haitians coming mainly from Chile and Brazil trying to reach the United States. In the last few years as migratory northbound waves of Haitians grow, the size of the Haitian presence in Mexico has swelled considerably. Some decide to make Mexico their home, while others have the United States as their destination.

Haitian migrants cross the Suchiate river, the natural loosely guarded border between Mexico and Guatemala, into Chiapas, the southern department in Mexico. Migrants have the choice to request asylum upon entering Chiapas, Mexico and wait until they get official status, which gives permission to work and move within Mexico. Or, continue going north, without any documentation, risking deportation. This process has skyrocketed in 2021 with Haitians applications for asylum in Mexico increasing to 4,824%, when compared with 2 years ago. According to Mexican law, asylum seekers must remain in the department from where they requested asylum.

There are currently ten of thousands of Haitians waiting for their refugee status in Tapachula, where the Mexican Commission for Refugee Assistance (COMAR in Spanish) is located. Most of the clusters of Haitians in Mexico are located in the same departments as the  COMAR offices.