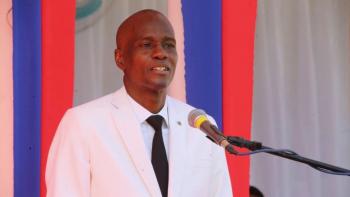 Haiti’s de-facto president, Jovenel Moïse, on May 18, during an official ceremony to commemorate the 218th anniversary of the creation of the Haitian national flag. Photo: Jovenel Moïse/Twitter

Jovenel Moïse, whose term ended on February 7, has refused to transfer power and plans on carrying out an electoral process that has been deemed illegitimate by the millions of Haitians mobilizing on the streets for the last several months

May 18 marked the 218th anniversary of the creation of the Haitian national flag. On this day in 1803, liberator Jean-Jacques Dessalines tore the French tricolor flag, which was a symbol of colonialism and slavery, and created the bicolor, which is a symbol of peace, unity, brotherhood and freedom. In commemoration of the significant revolutionary event, yesterday, thousands of citizens, members of various social and civil rights organizations and opposition political parties took to the streets across Haiti to pay homage to their ancestors and Father of the Nation Jean-Jacques Dessalines.

In the face of the attack against their freedom under the current illegitimate regime of de-facto President Jovenel Moïse, Haitians carried out various massive mobilizations in the capital Port-au-Prince as well as in other major cities of the country. Protesters manifested their rejection of the president’s decision to hold a constitutional referendum on June 27 and general elections on September 19. The opposition has explained that the new constitution provides for the return to an authoritarian presidential regime and will return the country to a dictatorship like that of François Duvalier and Jean-Claude Duvalier’s (1957-1986).

The protesters once again demanded that Moïse, whose presidential term constitutionally ended on February 7, 2021, and who has been overstaying in office and clinging to power since then, respect the constitution and step down. They demanded that he transfer power to the agreed interim government to administer the country for the next two years, recover it from the deepening institutional crisis caused by Moïse’s administration and organize elections for the next government.

Meanwhile, Moïse, during an official ceremony to commemorate the Flag Day, ruled out the establishment of a transitional government as a strategy to renew political power in the country. Additionally, he insisted on holding elections to seek stability, despite the rejection of the same by millions of Haitians who have been mobilizing against this unconstitutional plan since the beginning of this year.

Moïse said that “transition never brings anything to the country except for that old mischievous deal, which divides the state into small pieces.” He added that “we cannot continue to do so, I call on all actors to make an effort to put the country on the path of stability,” highlighting the importance of holding elections and participating in them, starting with the constitutional referendum in June.

The opposition sectors once again alerted that the current Constitution of 1987, which is the main achievement of the democratic movement of 1986, prohibits its modification through popular consultation. They also denounced the unilateralism of the Independent Consultative Committee (ICC), which is in charge of drafting the new constitution.

Lawyer André Michel, leader of the opposition Democratic and Popular Sector party, on his twitter account rejected Moïse’s call for unity. “We reject the call for Unity and Dialogue launched by Jovenel Moïse. Unity and dialogue are not possible with the corrupt, the violators of the Constitution and the authors of the State Massacres perpetrated in the popular districts. Long live the Citizen Mobilization!,” wrote Michel in a tweet.

In February, the Federation of Haitian Lawyers stated that the Provisional Electoral Council (CEP), appointed by the president, does not have any legitimacy to organize these electoral processes as Moïse has been ruling by a decree with a non-functional parliament since January 2020.

Last month, even the UN, the Organization of American States (OAS) and the US, which explicitly support Moïse’s unconstitutional regime and his plans to hold elections, criticized the plebiscite and the draft of the new constitution for not being inclusive enough.