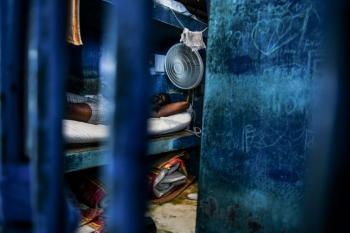 With protests rocking the streets, some prison authorities in Haiti have confined inmates to cells that lack showers or toilets, in a country where most detainees are stuck awaiting trial for months or even years.

The move is meant to stop protests from breaking out in Haiti's badly overcrowded prisons, but violates the law and risks the health of prisoners, human rights advocates say.

"To prevent any kind of riot from the general tension in the country, prison officials decided to keep detainees in their cells without being allowed at least an hour of outdoor time," Marie Rosy Auguste Ducena of the National Human Rights Defense Network (RNDDH) told AFP.

The permanent confinement exacerbates the already dire situation of Haiti's prisons, which are the most overcrowded in the world with an occupancy rate exceeding 400 percent.

The law dictates that inmates should get at least six hours per day outside of their cell, while international standards recommend at least four square meters (yards) of living space per person.

But in the impoverished Caribbean nation, the average prisoner only gets less than a meter to themselves.

"People are being held in inhumane conditions that we at RNDDH have long regarded as torture and cruel and degrading treatment," Ducena said.

As of October 15, the Port-au-Prince prison, commonly called the "National Penitentiary," had 3,626 inmates. It was built to hold 778.

"When we take the example of the National Penitentiary, which is the largest detention center in the country, it could be likened to a concentration center," lamented Haitian lawyer Jacques Letang.

Outside prison walls, opponents of President Jovenel Moise have protested what they see as his illegitimate election in 2016, barricading roads and snarling supplies of staple foods, while raising fears that the country's already precarious humanitarian situation will become worse.

"Amid the crisis, it's hard to get food and water to prisons," Ducena said.

Even the courts themselves have been drawn into the strife.

"Almost all courts in the country are closed and three judicial buildings have been burned since the beginning of the crisis," Ducena said.

"The situation is always alarming, and rather than take risks, lawyers and judges stay at home."

The Port-au-Prince courthouse "is sandwiched between the fiefs of several rival gangs," Ducena said.

In the area around the public prosecutor's office in Port-au-Prince, armed groups routinely divert vehicles, while gun battles have broken out at random for the past year.

Asked about the situation, prison and police authorities in Haiti declined to comment.

Three-quarters of the 10,905 people jailed in Haiti today are awaiting trial, some for more than a decade, in what Letang said was the blatant flouting of criminal procedure.

"Anyone arrested must be able to have their case heard before a judicial authority within 48 hours, but police make arrests and let people spend weeks or months in custody," said Letang, president of the Human Rights Office in Haiti NGO.

One way to stop this practice would be to penalize judges who don't hear cases on time, he said.

"An examining magistrate who leaves an individual behind bars for years without worrying about his fate has no cause for concern," Letang said in describing the situation today.

But judicial reforms will matter little if the corruption rife in Haiti's justice system is not also addressed.

"Today, if you have money, you do not go to jail long," Letang said.